This Month in Movies - July 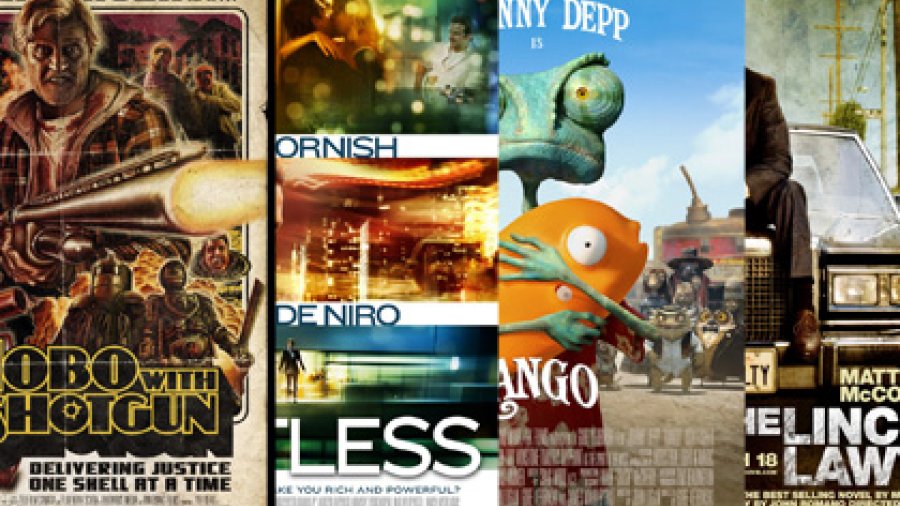 July 5: It doesn’t take a big stretch of the imagination to figure out what Hobo with a Shotgun is about. Rutger Hauer stars as the titular Hobo who is looking for a fresh start in Hope Town. It sounds like a good idea until he realizes that the town is anything but hopeful, overrun as it is with corruption and violence. He gets himself a shotgun with the money he earned from hobo-exploitation films and embarks on a vengeful mission. Everybody gets it. It probably goes without saying that Hobo with a Shotgun is not an intellectual film, unless brains splattered on the camera lens counts as cerebral. Filmed in Halifax, this Canadian evil gore-fest is the spawn of a fake trailer that appeared in Robert Rodriguez and Quentin Tarantino’s Grindhouse (like last year’s Machete). If this is a pattern, that could mean there are three more possible b-movies waiting in the wings.
Other releases: Ceremony, The Company Men, Shelter, Warriors Way

July 12: Another imaginative title, The Lincoln Lawyer is about Mickey Haller, a criminal defense attorney who conducts most of his business out of a Lincoln Town Car. Thankfully, that is not the whole premise, and the story gets a little meatier and suspenseful. With a client list that usually consists of gangsters and drug dealers, Mickey is no idealist, but when he takes on a real estate tycoon’s case things get a little weird. There is an eerily similar case for which another man is serving time and the realtor seems a little too slippery, even by Mickey’s standards. The Lincoln Lawyer doesn’t break the mould, but with a strong cast that includes Marisa Tomei, William H Macy and Matthew McConaughey, it does take on a suspenseful shape. Here’s hoping that McConaughey continues to stay away from the cheesy beefcake roles.
Other releases: The Dogfather, Insidious, Miral

July 15: Rango gives the Western an animated facelift, but that doesn’t mean that it’s much of a kid’s flick. While there is plenty of slapstick and pretty clean language, much of the humour derives from trotting along the well-worn trails of cowboy pictures. (But what do I know – I though Wall-E was depressing and kids love it.) The film follows Rango, a pet chameleon, who finds himself stuck in the desert town, where he gets appointed sheriff after taking down one of the town’s worst outlaws. When Rango discovers how wild this Western town is, he doesn’t think he’s up to the task of cleaning it up. Of course, every hero has moments of doubt, and Rango is no different.
Other release: Arthur

July 19: What if our intelligence were Limitless? What if we could take a pill that would make learning a breeze and self-doubt a thing of the past? Eddie Morra (played by Bradley Cooper) has a life that is spiralling out of control, but when he is introduced to a smart drug, he begins to realize his potential – and then some. He simply cannot lose. But this drug comes with some issues: the hangovers and withdrawal are brutal, and gangsters want its recipe. Eddie has to negotiate through a series of twists, murders and double-crosses, trying to figure out how to use his new-found brainpower to set himself up for life.
Other releases: Peep World, Mayor Cupcake, Tekken

July 26: Starring Molly Parker and Tracey Wright, Trigger is darkly poignant film about two former bandmates who meet for dinner to see if they can stand being in the same room together. Through a haze of drug addiction and rock ‘n’ roll chaos, the pair had long since gone their separate ways, both literally and figuratively. One lives in LA writing jingles, the other a cynical recluse. Originally, the film was meant to be a sequel of sorts to Bruce MacDonald`s Hard Core Logo, with Hugh Dillon and Callum Keith Rennie reprising their roles as Joe Dick and Billy Tallent. Trigger eventually got rewritten for female characters, with Parker and Wright in mind. Wright gives a career-defining performance. Her character`s musings about life are especially heartrending given that Wright filmed the movie while undergoing cancer treatment, a cancer she succumbed to last summer.
Other releases: Bloodrayne Third Reich, Ghost from the Machine, Source Code