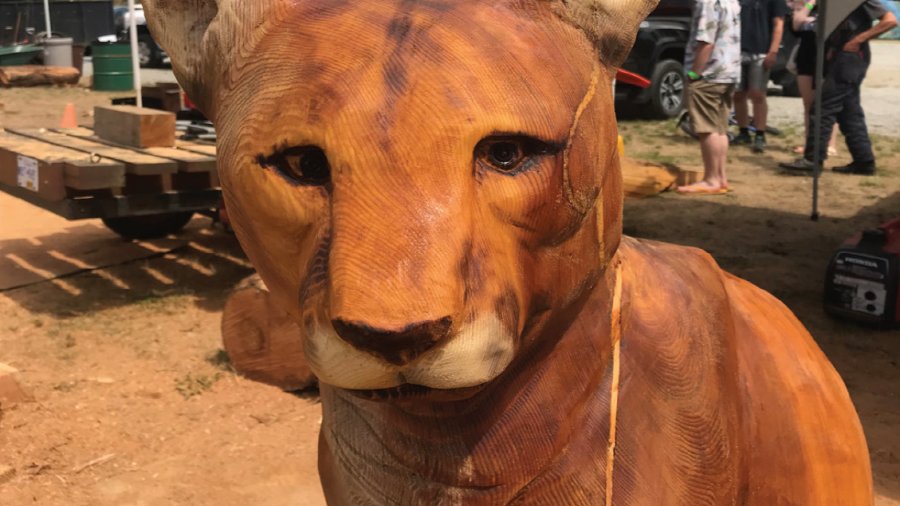 My first attempt at chainsaw carving did not turn out like I thought it would. It was absolutely terrible. It was a human face and it was really bad. I did however know where my mistakes were. So I set out to carve another one right away and I made almost all the same mistakes. I didn't get discouraged though and I told myself that I'll keep at it until I get it. All this happened at Pierre Turgeon's log house on my hometown ski hill in Rawdon, Quebec. A few weeks later Pierre was going into deep Ontario for a big international chainsaw carving symposium and I managed to talk myself into going as a carver. There were about 35 pro carvers there from all around the world. And me. It was thrilling and terrifying and I loved it.

They placed me right beside Bob King from Washington State. BOB KING! Now, it's difficult to say who is the best chainsaw carver in the world but Bob's name would have to be high up on that list. I watched with amazement at what this man created over four and a half days. Absolutely spectacular! A composition with deer, wolves, bears and a lynx. All in one log! I was blown away.

During that event I managed to carve a contemporary piece with two human heads incorporated. I didn't make those same mistakes and my sculpture came out quite nicely.  A small municipality in Ontario bought it and installed it in a public garden. I was pretty stoked. I was all in after that. When I came home from that event I was never very far from my chainsaw.

These days, chainsaw carving competitions are part of what I do. I enjoy them more and more for many reasons. I am consistently impressed with the scope and ambition of the art that is created in such a short period of time. With only three and a half days we transform a huge log into intricate, detailed sculpture. Another aspect of these events that is priceless is the camaraderie among the carvers. I have made many great friends from around the world through chainsaw carving competitions. Though we compete against each other, we are often each other's greatest support, lend a helping hand or offering some of our favourite tools if it can help out a fellow carver. When we go to these events we forfeit the sculpture to the event's organisers. Often these sculptures are installed throughout the towns and cities that host them. It's happened to me more than once that someone from another town will stop in at my studio and tell me how much they like the carving as they explain to me where they see it every day.

I began carving professionally when we moved to Fernie four years ago. I have to admit that I feel a surge of pride when I am being addressed at these events as Michael Penny from Fernie, BC. I have even managed to pick up a nickname on the circuit, "Fernie Mike" or sometimes just “Fernie." Come to think about it. It's the best nickname I have ever had.