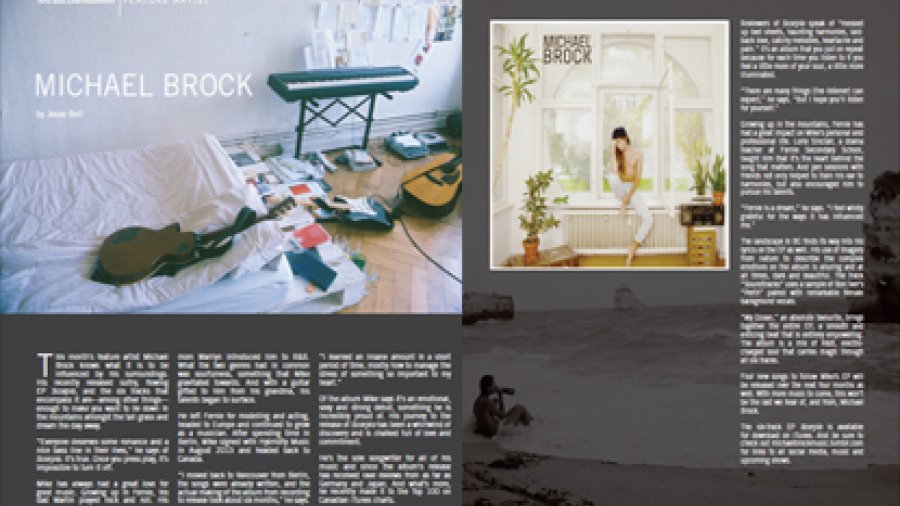 This month’s feature artist Michael Brock knows what it is to be influenced by his surroundings. His recently released sultry, flowing EP Scorpio, and the six tracks that encompass it are—among other things—enough to make you want to lie down in the mountains amongst the tall grass and dream the day away.

“Everyone deserves some romance and a nice bass line in their lives,” he says of Scorpio. It’s true. Once you press play, it’s impossible to turn it off.

Mike has always had a great love for good music. Growing up in Fernie, his dad Martin played rock and roll. His mom Marilyn introduced him to R&B. What the two genres had in common was soulfulness, something that Mike gravitated towards. And with a guitar gifted to him from his grandma, his talents began to surface.

He left Fernie for modelling and acting, headed to Europe and continued to grow as a musician. After spending time in Berlin, Mike signed with Hybridity Music in August 2013 and headed back to Canada.

“I moved back to Vancouver from Berlin, the songs were already written, and the actual making of the album from recording to release took about six months,” he says. “I learned an insane amount in a short period of time, mostly how to manage the stress of something so important to my heart.”

Of the album Mike says it’s an emotional, sexy and strong debut, something he is incredibly proud of. His journey to the release of Scorpio has been a whirlwind of discovery and is chalked full of love and commitment.

He’s the sole songwriter for all of his music and since the album’s release has received rave reviews from as far as Germany and Japan. And what’s more, he recently made it to the Top 100 on Canadian iTunes charts.

Reviewers of Scorpio speak of “messed up bed sheets, haunting harmonies, laid-back love, catchy melodies, heartache and pain.” It’s an album that you put on repeat because for each time you listen to it you feel a little more of your soul, a little more illuminated.

“There are many things [the listener] can expect,” he says. “But I hope you’ll listen for yourself.”

Growing up in the mountains, Fernie has had a great impact on Mike’s personal and professional life. Lorie Sinclair, a drama teacher at Fernie Secondary School, taught him that it’s the heart behind the song that matters. And jam sessions with friends not only helped to train his ear to harmonies, but also encouraged him to pursue his talents.

“Fernie is a dream,” he says. “I feel wildly grateful for the ways it has influenced me.”

The landscape in BC finds its way into his lyrics on the EP as well. His use of imagery from nature to describe the complex emotions on the album is alluring and at all times, dark and beautiful. The track “Soundtracks” uses a sample of Bon Iver’s “Perth” paired with remarkable female background vocals.

“My Ocean,” an absolute favourite, brings together the entire EP, a smooth and enticing beat that is entirely empowering. The album is a mix of R&B, electro-charged soul that carries magic through all six tracks.

Four new songs to follow Mike’s EP will be released over the next four months as well. With more music to come, this won’t be the last we hear of, and from, Michael Brock.

The six-track EP Scorpio is available for download on iTunes. And be sure to check out michaelbrockmusic.tumblr.com for links to all social media, music and upcoming shows.