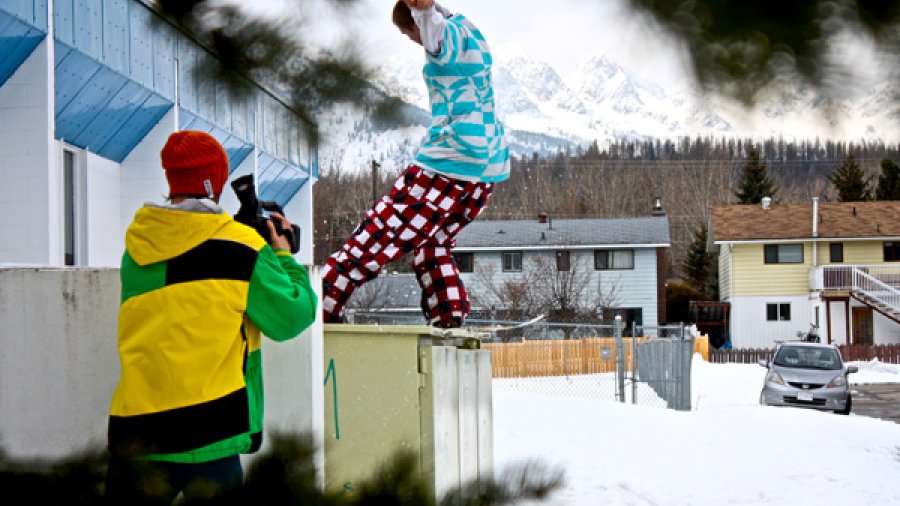 Matty Westcott
I got into filmmaking in 2006 when Mikel Witlox and my brother Thom and I tried our hand at making a ski movie. I immediately fell in love with videography and film production and decided to pursue it as a career. I started DBFilms (Dubs Brothers Films) and have had some great experiences. I've produced content for Biglines.com, Ride Guide TV and done a range of promotional work. It's making films with my friends that gives me the most enjoyment though. I feel lucky to have had the chance to make some unique films with my good friends over the last couple of years and am proud of the ground we have all covered in such a short period of time.

I'm currently doing a Post Grad Sports Journalism program at Loyalist College in Belleville, Ontario. Although I am desperately missing the snow and winter routine I've grown accustomed to over the last seven years in Fernie, I am enjoying the program and being back at school after an eight-year hiatus.

Joel Whalen
Jah Raven Creation was spawned as a label in which I could use to brand any form of creative outlet that I manufacture, weather it be film, photo, or other means of artistic visions. Film grabs a hold of me, it tells me what to do with my life. Everything I watch molds me and shapes me as a person. Nothing has the same affect on me as an amazingly well done film. It’s incredible when sound and moving pictures harmonize to create a vision, a feeling. I find surf films to be the most inspiring because of the extremely simple and soulful vibrations they tend to put out, but there is a film on any and every subject that will educate you, change the way you see things. What I try to do with film is give something to people that they can relate to but at the same time inspire them. Basically I want to change lives. Eventually.

Extra.Ordinary.
In the 2008-2009 winter Matty and I came together to work on a film project, which we aptly entitled Extra.Ordinary. With an incredible drive and passion for film we spent every moment we could shooting with riders and compiling as much footage as we could throughout the season. The riders were almost entirely Kootenay locals. The Koots has such an untapped talent pool. Being so far from any major ski or snowboard scene out there, people just shred here because they can and it’s amazing to see. The Kootenays is a magical place and we are trying to give it and the riders within it a way to be exposed in the ski and snowboard community to show there is a culture.

With no budget or sponsors the film was funded by money from our own pockets, meaning travel was limited, so almost the entire movie was filmed in the Kootenay area. There is so much terrain in our backyards we just took advantage of it being close so there wasn’t really a need to travel too far. Plenty of snow and variety of features gave us what we needed to capture the essence of a Kootenay winter.

When the season began we didn’t really have a plan other than wanting to film, and as the season progressed and came to a close we realized we had more than enough footage to create a ski and snowboard film. While Matty had to move to Ontario for school I stayed in Fernie so we edited the film together over the Internet. It was a lot of work to say the least. After a few months of intense, non-stop editing, all day - every day, Extra.Ordinary. was created and we were really, really happy with the product…but the work didn’t stop there.

The film was submitted and accepted into multiple film festivals including the Banff Film Festival, Kendall Mountain Film Festival, Stowe Mountain Film Festival and many more. It received a great response at the Banff Film Festival and will be going on the world tour which is super exciting. The feedback from the local ski and snowboard community has been overwhelming. People seem to be incredibly stoked on the final product. We feel it’s a film that the everyday skier can relate to - it makes them want to go out and ski not only because it’s awesome but because it’s fun as well.

Extra.Ordinary. is available at multiple locations in Fernie including Straightline, Commit Snow and Skate, and Edge of the World. It can also be ordered online at www.dubsbrotherfilms.com.