Little House on the Canterbury Plains 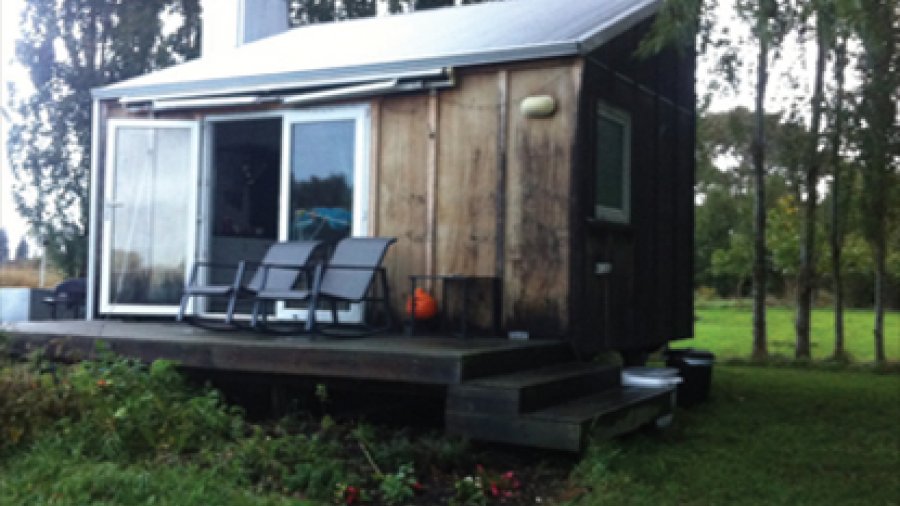 As this is the annual green issue of the Fernie Fix, what auspicious timing that two weeks ago I moved to an off-grid cabin down an unsealed access road about twenty minutes from the outskirts of Christchurch. As you do.

It was a complete snap decision: I’d been looking for a new place to live – which is no mean feat in post-earthquake, rack-rent Christchurch – and saw this place listed on the internet: an “eco-cabin” on the back end of a thirty-acre lifestyle block, solar-powered with a back-up generator, and the ideal tenant described as “self-sufficient, energy-conscious and with a sturdy vehicle.”

Intrigued, I arranged to go look at it. Out I drove from Christchurch on a glorious late summer evening. I left the suburbs and traffic lights and shopping centres behind me and headed onto the Canterbury Plains, the Port Hills behind. I met the landlord at his house and ‘round to the cabin we drove. Double doors to the front onto the deck. Kitchenette to the left, living area complete with couch bed for guests, bathroom through to the right. Upstairs, a loft-style bedroom. Vegetable garden to the fore, walnut trees to the rear. A small private airstrip on the property and the paddock in front of the cabin rented to a woman who does natural horsemanship, ie; a horse whisperer.

I stood on the deck, with the horses whinnying and cattle lowing, a breeze blowing through the willows. A childhood of devouring the Little House on the Prairie and Anne of Green Gables series, followed by my later adulation of The Catcher in the Rye (running away to live in a cabin in the woods) and Into the Wild (ditto, although substitute house-bus for cabin) came rushing back – I’ll take it, I said.

In I moved and a bucolic first weekend followed. The first morning, I took my tea outside and drank it at the paddock gate, the horses coming up for a sniff and an explore. I unpacked, listening to Neil Young by solar power, taking such pride in setting up house and nesting that I was practically clucking out loud. A friend and I, in quite the feat of engineering, managed to hoist a queen mattress into the loft, a process which involved dissembling light fixtures, taking down the safety railing and a good measure of cursing. (Having so large a mattress in so small a cabin – or “bijou” is the term I prefer – is a gloriously eccentric use of space but I simply refused to settle for a single mattress as that is far, far too Crazy Cat Lady in the Country. Actually, I’m not sure how I’ll fare if I do acquire a bedfellow since they will just keep bonking their head against the sloping roof, but I’ll be sure to keep you versed, Fernie Fix readers, of any loft liaison logistics).

Reality firmly kicked in, however, a few days later. On Sunday evening it started to rain. And it rained. And rained. And the wind started to blow. And it blew. And blew. In brief, Christchurch was hit by a 100-year storm. The winds reached 160km/h, the area received a month’s rain in a day, and because of the altered topography since the earthquake (I’m no geologist, so bear with my scanty explanations), Christchurch was much more badly flooded than in would have been in its pre-earthquake days.

It was an interesting week to have moved off-grid. The power went out (not much solar power in a storm), a tree came down beside the house, some more branches came down and blocked off the (somewhat flooded) access lane. Everything that had seemed exciting and an adventure on a sunny evening now seemed dispiriting and difficult in the deluge. Rather than returning to a simpler life, had I just made life more complicated for myself? Morale was low.

When the storm finally moved off, I did what any sensible person would do: I cranked the generator, cranked the Rihanna, swept the floor and did the dishes (much is made of sweeping the floor at chapterly intervals in Anne of Green Gables, so who am I to quibble?), then threw on my outdoor gear and went for a walk, determined to enjoy the upsides and not just the inconveniences of rural life. Character building, it’s all character building.