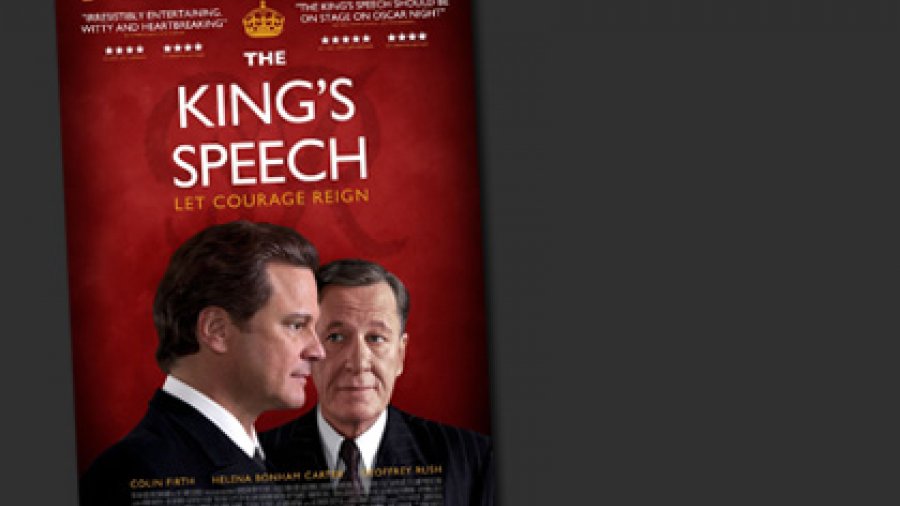 Royalty has been portrayed many different ways in many different films. Royals have been variously presented as benevolent (Mufasa in the Lion King), mentally ill (King George the Third in the Madness of King George), polite (Jack Skellington in the Nightmare before Christmas) and, of course, completely evil and underhanded (Emperor Palpatine in Return of the Jedi, The Queen of Hearts in Alice in Wonderland). There are, however, very few films that portray Kings and Queens as ordinary people just as flawed and vulnerable as the rest of us. The King’s Speech is a film which attempts to do just that.

It is the tale of King George the 6th, figurehead monarch of England from 1936 to 1952, and his attempt to overcome the stutter which prevented him from fully engaging in his most important task as ruler of the British Empire in the early part of the last century, that is, making speeches.

This is a good movie. It features excellent performances from Colin Firth as King George the 6th, Helena Bonham Carter as the Queen and Geoffrey Rush as Lionel Logue, the eccentric, irreverent, incurably compassionate speech therapist who cures the king, however briefly, of his disability. Also in the cast are Derek Jacobi as the Archbishop of Canterbury, Timothy Spall as Churchill, and Guy Pierce as Edward, Prince of Wales.

I do not believe, however, that Colin Firth deserves the Oscar for best actor. He does an excellent job of portraying an emotionally-constipated upper class Englishman. The problem is that he has been playing exactly that role for a decade and a half, starting with the aristocratically-minded Mr. Darcy in the popular 1995 TV movie adaptation of Pride and Prejudice. In playing King George, he is repeating the same role except this time his aristocrat has a stutter. You should win an Oscar for trying to stretch yourself artistically, as Robert Downey Jr. did in Chaplin, not by revisiting old material.

The man who does deserve an Oscar for his performance in this film is Geoffry Rush. Rush does an incredible job of playing an individual who is both cocky and empathetic, serious and clownish. It is an excellence performance. This is hardly surprising, though, given that Rush has for many years churned out excellent performance after excellent performance in a wide variety of films. From playing the brilliant, yet troubled, pianist David Helfgott in Shine, to performing as Casanova Frankenstein in the super-hero comedy Mystery Men he has excelled in every role he has been given even when portraying a truly corrupt and malicious individual like the spy-chief Sir Francis Walsingham in Elizabeth, the bio-pic of Queen Elizabeth I that incidentally catapulted a fellow Australian (Kate Blanchett) to stardom.

It is worth noting that Helena Bonham Carter who has also acted masterfully in many challenging roles (Sweeny Todd, Big Fish, Margaret’s Museum) did not get the Oscar for best supporting actress, although her role in this film was certainly underwritten.

But anyway, this is a fine film, and you should most definitely rent it.