Jon Turk and Jody Weber - Synchronicity and the Sacred Space 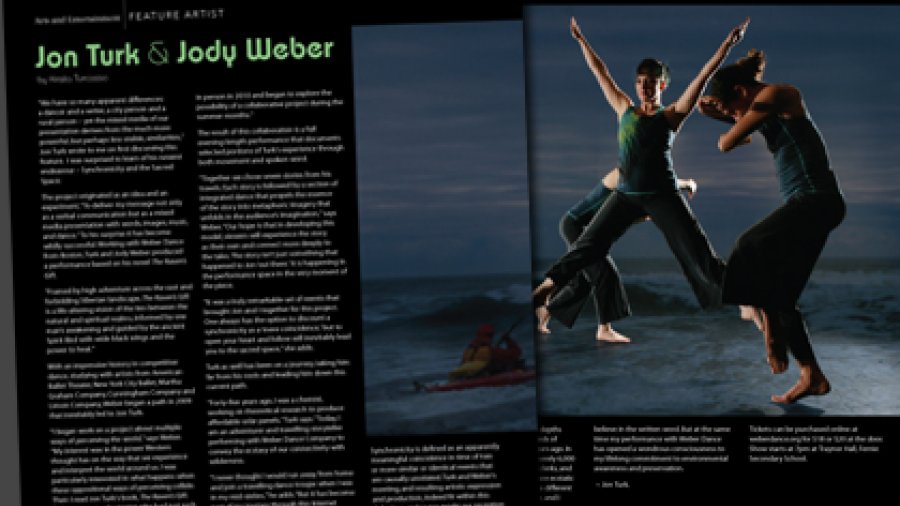 “We have so many apparent differences: a dancer and a writer, a city person and a rural person – yet the mixed media of our presentation derives from the much more powerful, but perhaps less visible, similarities,” Jon Turk wrote to me on first discussing this feature. I was surprised to learn of his newest endeavour – Synchronicity and the Sacred Space.

The project originated as an idea and an experiment, “To deliver my message not only as a verbal communication but as a mixed media presentation with words, images, music, and dance.” To his surprise it has become wildly successful. Working with Weber Dance from Boston, Turk and Jody Weber produced a performance based on his novel The Raven’s Gift.

“Framed by high adventure across the vast and forbidding Siberian landscape, The Raven's Gift is a life-altering vision of the ties between the natural and spiritual realms, informed by one man’s awakening and guided by the ancient Spirit Bird with wide black wings and the power to heal.”

“I began work on a project about multiple ways of perceiving the world,” says Weber. “My interest was in the power Western thought has on the way that we experience and interpret the world around us. I was particularly interested in what happens when these oppositional ways of perceiving collide. Then I read Jon Turk's book, The Raven's Gift. Turk was a trained scientist who had just such an encounter and his experience of the world around him is permanently altered. Through a series of peculiar synchronicities, Jon and I met in person in 2010 and began to explore the possibility of a collaborative project during the summer months.”

The result of this collaboration is a full evening-length performance that documents selected portions of Turk’s experience through both movement and spoken word.

“Together we chose seven stories from his travels. Each story is followed by a section of integrated dance that propels the essence of the story into metaphoric imagery that unfolds in the audience’s imagination,” says Weber. “Our hope is that in developing this model, viewers will experience the story as their own and connect more deeply to the tales. The story isn’t just something that happened to Jon ‘out there.’ It is happening in the performance space in the very moment of the piece.

“It was a truly remarkable set of synchronicities that brought Jon and I together for this project. One always has the option to discount a synchronicity as a ‘mere coincidence,’ but to open your heart and follow will inevitably lead you to the sacred space,” she adds.

Turk as well has been on a journey, taking him far from his roots and leading him down this current pass.

“Forty-five years ago, I was a chemist, working on theoretical research to produce affordable solar panels,” Turk says. “Today, I am an adventurer and travelling storyteller performing with Weber Dance Company to convey the ecstasy of our connectivity with wilderness.

“I never thought I would run away from home and join a travelling dance troupe when I was in my mid-sixties,” he adds. “But it has become part of my journey through this Internet crazed, oil-soaked world.”

Synchronicity is defined as an apparently meaningful coincidence in time of two or more similar or identical events that are causally unrelated. Turk and Weber’s meeting, and resulting artistic expression and production, indeed fit within this definition, and so too might our reception of Synchronicity and the Sacred Space this November 17 at Traynor Hall in Fernie.

Music and dance evolved in the depths of human consciousness, hundreds of thousands or even millions of years ago. In contrast, writing was invented merely 6,000 years ago by Sumerian despots, clerks, and tax collectors. Dance and music are ecstatic media; writing is fundamentally a different beast. Yet, I have become a writer, and I believe in the written word. But at the same time my performance with Weber Dance has opened a wondrous consciousness to my lifelong commitment to environmental awareness and preservation.
~ Jon Turk.

Tickets can be purchased online at weberdance.org for $18 or $20 at the door. Show starts at 7pm at Traynor Hall, Fernie Secondary School.