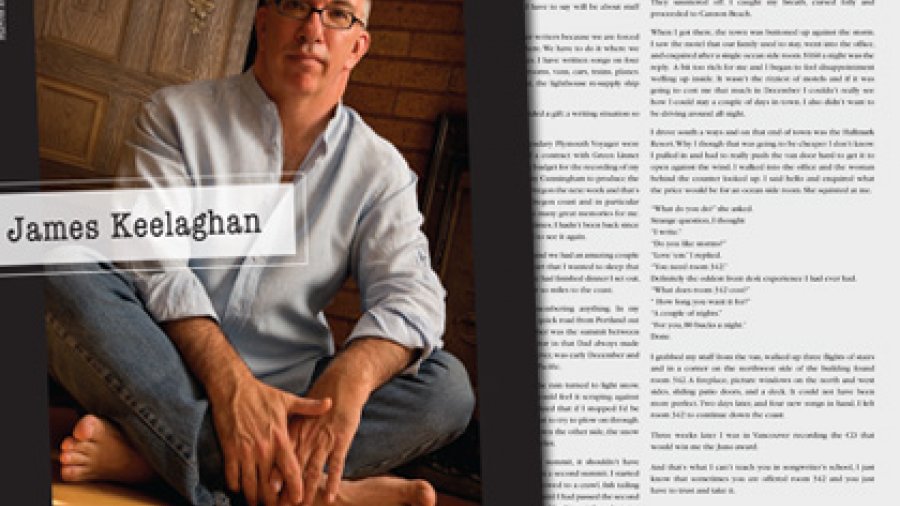 I’ll be in Fernie this month to teach a song writing course at the Fernie Writers’ Conference. There will be nuts and bolts approaches, but some of what I have to say will be about stuff that you can’t teach.

Musicians are different than other writers because we are forced to write anywhere and everywhere. We have to do it where we can and where inspiration strikes. I have written songs on four continents, in countless motel rooms, vans, cars, trains, planes. I wrote a song on, but not about, the lighthouse re-supply ship Granuaile in Galway Harbour.

Every now and again, you get handed a gift: a writing situation so perfect that it can’t go wrong.

It was late 1992. Me and my legendary Plymouth Voyager were on a long road. I had just signed a contract with Green Linnet Records in Danbury CT, and had a budget for the recording of my new CD. They really wanted Johnny Cunningham to produce the CD. I was going to be in Portland, Oregon the next week and that’s where Johnny lived. I love the Oregon coast and in particular Cannon Beach, because it holds so many great memories for me. My family vacationed there a few times. I hadn't been back since I was fourteen and I really wanted to see it again.

Johnny and I met up at a great pub and we had an amazing couple of hours together. I had it in my heart that I wanted to sleep that night in Cannon Beach and after we had finished dinner I set out, in pounding rain, to drive the 50 or so miles to the coast.

Memory is a lousy tool for remembering anything. In my boyhood memory it was a straight, quick road from Portland out to the beach. What I didn't remember was the summit between Portland and the coast. I didn't factor in that Dad always made that drive in the summer. This, however, was early December and the wind was howling in from the Pacific.

As I began to ascend the summit the rain turned to light snow, then to snow deep enough that I could feel it scraping against the undercarriage of the van. I realized that if I stopped I’d be stuck, and there was nothing for it but to try to plow on through. I made the summit and as I came down the other side, the snow turned back to rain and I began to relax.

Now, having not remembered that summit, it shouldn't have surprised me that I had also forgotten a second summit. I started to climb once more and as before slowed to a crawl, fish tailing and skidding, bumper deep in snow until I had passed the second crest. Descending the second time and looking at the odometer, I knew that I should be in the clear and was feeling righteous. I rounded a corner and there, across the road was a herd of elk. I hit the brakes, went into a driver’s side skid and came to rest ever so lightly against an indignant looking but unharmed buck.

They sauntered off. I caught my breath, cursed folly and proceeded to Cannon Beach.

When I got there, the town was buttoned up against the storm. I saw the motel that our family used to stay, went into the office, and enquired after a single ocean side room. $160 a night was the reply. A bit too rich for me and I began to feel disappointment welling up inside. It wasn’t the ritziest of motels and if it was going to cost me that much in December I couldn’t really see how I could stay a couple of days in town. I also didn’t want to be driving around all night.

I drove south a ways and on that end of town was the Hallmark Resort. Why I though that was going to be cheaper I don’t know. I pulled in and had to really push the van door hard to get it to open against the wind. I walked into the office and the woman behind the counter looked up. I said hello and enquired what the price would be for an ocean side room. She squinted at me.

I grabbed my stuff from the van, walked up three flights of stairs and in a corner on the northwest side of the building found room 342. A fireplace, picture windows on the north and west sides, sliding patio doors, and a deck. It could not have been more perfect. Two days later, and four new songs in hand, I left room 342 to continue down the coast.

Three weeks later I was in Vancouver recording the CD that would win me the Juno award.
And that’s what I can’t teach you in songwriter’s school, I just know that sometimes you are offered room 342 and you just have to trust and take it.