How Do Local Artists Showcase the Basin? 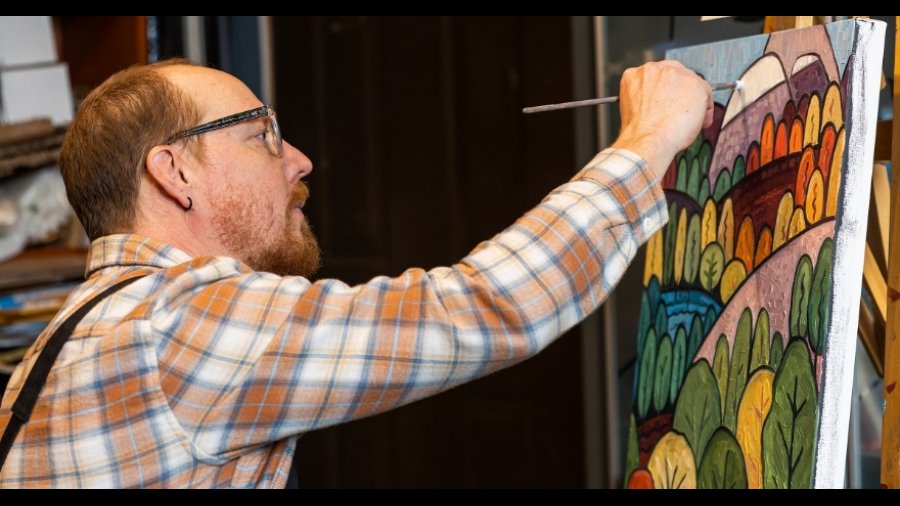 From afar, the dark, thick outlines make the piece resemble stained glass. Up close, you can see the brushstrokes of the thickly applied oil paint. You can also contemplate a myriad of interesting items, from homes and a human to forests and fields.

The painting, called Home/Place, captures the essence of the Columbia Basin on a 36-square-inch stretch of canvas—and is the centrepiece of Fernie artist Michael Hepher’s exhibition In This Together.

Originally from Lethbridge, Alberta, Hepher spent summers in Grey Creek, where his great grandfather had settled in 1908. “I grew up feeling like the Kootenays were my home,” he says. In 2000, he made that a reality by moving to Cranbrook, and then to Fernie, where his studio is now dedicated half to painting and half to his printmaking business, called Clawhammer Press.

The concept of In This Together started with a previous project. In 2018, the Fernie and District Arts Council received support from the Trust to paint a mural on a downtown wall. Hepher was the selected artist, tasked with encapsulating what life in Fernie meant, with “something for everyone,” he says: skiers, miners, hikers, members of the Ktunaxa First Nation and more.

Then, when he was considering applying to the Columbia Kootenay Cultural Alliance—which administers Trust funds to create vibrant arts and culture in the Basin, including over 110 projects in 2021/22 alone—he considered how he could expand the Fernie mural idea to encompass the entire region.

To create the works, Hepher camped in a few places, engaged long-distance with people in various communities and considered his own point of view: “My impressions and the things I saw going on.”

The result was 28 paintings and nine prints—a huge achievement. “I was painting like a fiend. I was sitting in front of my easel all through the summer working on these pieces and new ideas were coming to me. It really galvanized my creative energy.”

He also developed his painting style. For the mural, he had to move beyond his usual expressionistic technique to use a more graphic approach—similar to his printmaking—that suited the huge space. For In This Together, he then evolved this look again for a smaller format.

“On the whole, the show is quite colourful and cheerful and there’s lots of fun in it,” he says. However, he was developing it when residential schools in Canada started to discover unmarked graves on their land, and felt he needed to include darker themes, too. “I can’t leave those out because they’re also part of the story here.”

Thanks to the show, Hepher feels he has grown immensely as an artist and represented vital aspects of the region. “I don’t ever want to presume to have gotten everything nailed down in each area. But if I just pulled out one piece of history or culture and amplified it a little bit, I think that was a success.”