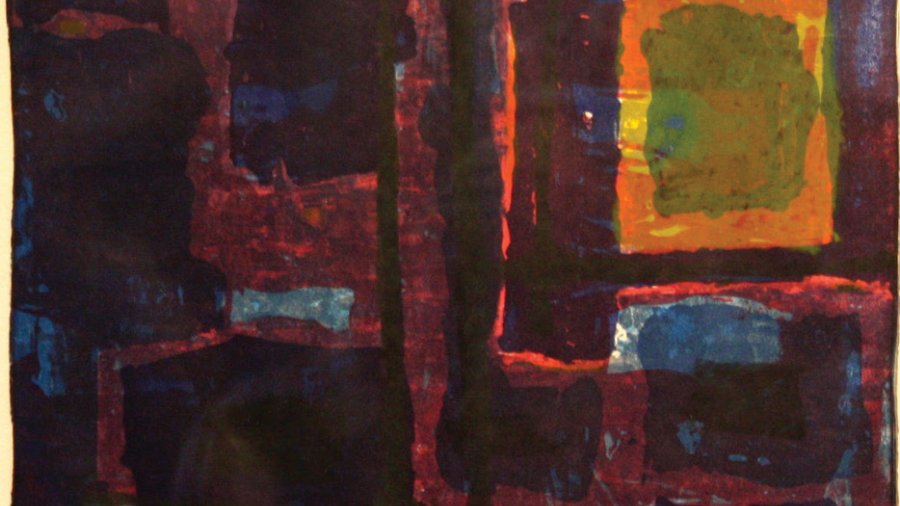 It’s a quiet evening on the prairies—the wind has let up for a short time, a rare moment of calm has settled over Calgary. It’s the mid-1950’s, and the people in the South-West of the city are taking advantage of the evening to greet one another from porches or stroll in the cool air at sunset. But the man who lives at 915 18th Avenue has left the dishes on the table, foregone the evening pleasantries and slunk off to the basement to work on transforming himself… into an artist.

John Harold Thomas Snow was born in Vancouver but lived most of his life in Calgary. A banker and a war veteran, his secret desire was to make art. In 1953 he and a friend, Maxwell Bates, rescued an old lithography press and some litho stones from the back alley of a commercial print shop. After a good cleaning, they set up the press in John’s basement and started teaching themselves how to print: it was Calgary’s first artisan printmaking studio.

Over time, John’s skills grew and he was soon fielding requests from other artists to print their work. His own work used bold shapes and flat perspective, relying primarily on complex and moody colours to render work that wandered from landscapes into complete abstraction. This modernist penchant attracted a number of other avant-garde artists to collaborate, not the least of which were Illingworth Kerr and W. L. L. Stevenson, the spearheads of the Alberta Modernist Art movement.

Despite his aversion to the limelight, John’s ongoing work and his openness about sharing his knowledge pulled him to the centre of an emerging cosmopolitan community of art and printmaking, sowing a seed for a cultural movement that remains vibrant to this day. He would often invite people over to his home to print with him, passing on knowledge and sharing his time.

After Snow’s death in 2004, his home was purchased by a local philanthropist and his legacy continues: to be operated as a resource and archive by The New Gallery, a non-profit centre for contemporary art.

John Snow worked his whole life as a banker.

Astonishingly, this amazing artist did all his work in his spare time. He found an idea that enriched his life, he chased it into a passion, and the flowering of his creativity has deeply affected his community as well as the arts and cultural scene in Calgary. Not bad for a ‘hobby.’

John and his life are profoundly encouraging because we carry this creativity within us—banker, butcher, liftie, coffee slinger—all. The seeds require tending; a little time and love, but at no point should we ever minimize the effect art can have on us and our community. Being an artist is a journey, but that journey has no timeline and no fixed destination. All we need is a starting point and the rest is just about keeping moving, seeing how far we can get. Fair warning, though: once you awaken that desire, you may find yourself slinking off to your basement instead of doing the dishes.

In:
Art and Entertainment
Tags:
arts, Culture, Fernie BC