Hits From the Throne 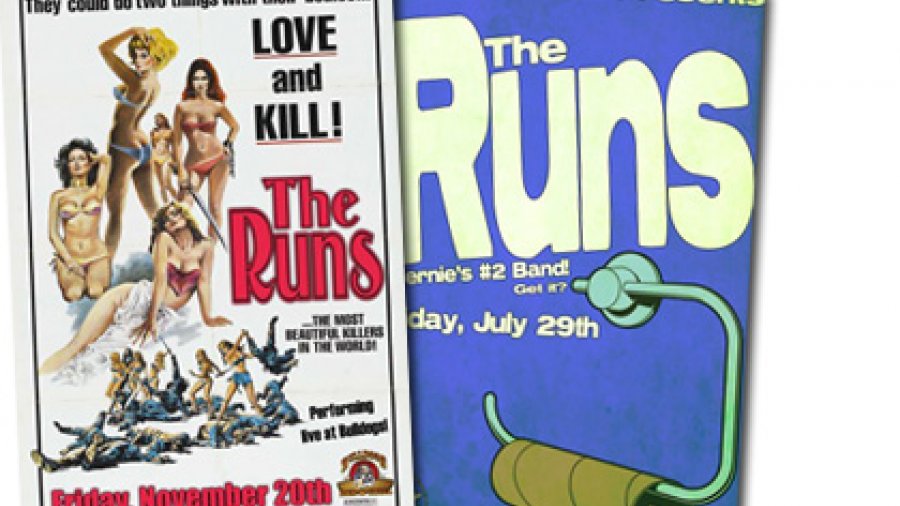 If you need a warm up and have some extra energy to burn after hitting the slopes, you need not look further than a night out with the Runs, affectionately known as Fernie’s Number Two Band. If you’re lucky enough to be unfamiliar with the Runs, the three men and a lady perform loud, fun punk – perhaps the only local punk band – and they have two dates set up for January, as well as a hotly anticipated CD release party in February.

Made up of some of Fernie’s coolest cats – guitarist and frontmen G-Money (Greg Barrow) and ADDam (Adam Laurin), drummer Night Night Dey Dey (Scott Deydey) and bassist Hot Lana (Alana Bamber) – the Runs have been afflicting Western ski towns for seven years now. I recently sat down with G-Money, the Runs’ number two front man, at the Edge of the World to ask him, “What the deuce?” Here are some of the highlights of our conversation.

FF: What is the name of your upcoming CD?

G-Money: The working title, right now, and it’s probably gonna stick, is, The Runs: I Don’t Remember Eating Corn. There is so much you can do with “the runs.” No Solid Hits. Explosive Rock. Number Two Band. It just goes on and on.

FF: Is this your first CD?

G-Money: The first CD that we are going to be proud of – I’ll put it that way. (laughs) We did a CD about five years ago, and we recorded it all in a 12-hour span – recorded it, mixed it and mastered it in 12 hours straight. And it was just terrible. And we were ashamed of it, and nobody even knew that we had it, basically. It was in the heroin days. We were all strung out. (tongue firmly in cheek)

FF: Is there any rivalry between you and ADDam (the other number two front man of the band) – I mean, competing for front-man status and competing snowboard shops?

G-Money: Not one bit – both of us think that the other guy is way better – you know. Seriously, and he is way better than me. He is; he’s awesome. So, no, there’s definitely no rivalry. We were in the band before he started Commit. So we were friends before that. So that makes the Runs seven years, because we were in a band before he started Commit.

G-Money: No! But Them Teasters are coming – we’re playing with Them Teasters at the Northern on January 10. You’ve got to come. They are so good and they’ll do “Roller Derby Queen.” We’re doing a little tour with them. It’s gonna be fun.

FF: All kidding aside, what was the band trying to accomplish with this album?

G-Money: We just want to be recorded. We want people to hear our stuff. And we wanted this album to sound like we sound – but when we’re at out best. We don’t want it to sound over-produced or fake. We’re not going to have any extra tracks that we can’t produce live. But we wanted it to be as good as we could possibly be. And I don’t know – just to preserve the music that we’ve created. It’s important – as an artist, you want to have that piece of history. And we’ve been playing a long time and we’ve got quite a few songs that we’ve been doing almost the whole time, and they’re popular, but we don’t have them down so you can take them home and listen to them.

The Runs are performing at the Northern with Them Teasters on January 10 and again on January 29. Stay tuned for the February date of the band’s CD release party at the Royal.