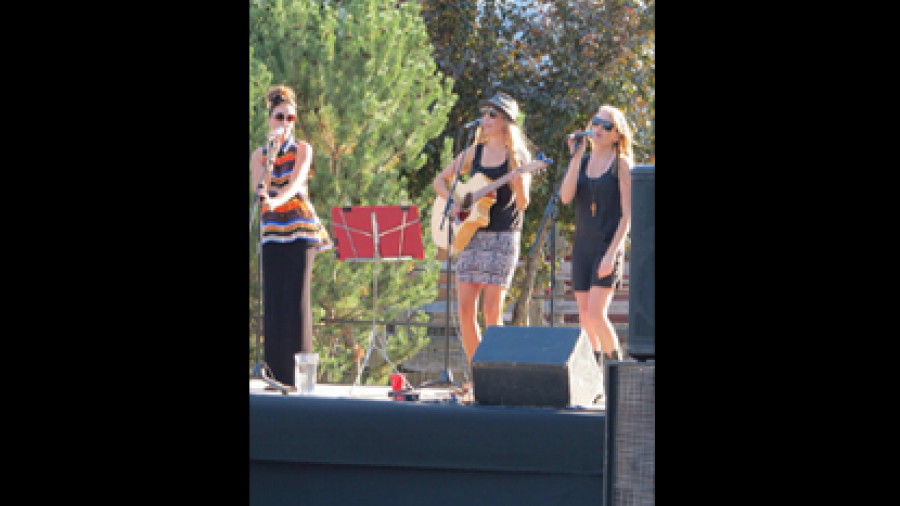 This month, Wednesday Night Socials start up again, and they’ve turned into something pretty special. They’re good ol’ fashioned street parties and a great way to finish off the week’s hump day. They’re a fantastic way to acquaint yourself with Fernie’s local talent (and others, of course) and a fabulous way to introduce the wee ones to the joys of live music.

This year kicks off July 2, with Hark Raving Sirens, a trio of Fernie women who are opening for Bubba Dos.Like the sirens of Greek mythology, Rachel Butterworth, Pam Murray and Kate Pollock have enchanting voices that have drawn in a strong following. And the band has been kept busy as a result, performing regularly at Infinitea and the Royal, for Arts and Letters, as well as landing bigger gigs, like Canada Day (last year and this) and opening for Shred Kelly in Lake Louise in the spring.

“I’d never met any of Shred Kelly, and I was kind of nervous, because they are so well known and they’re doing so well for themselves. And it was, ‘oh god! We’re supporting Shred Kelly!’” Butterworth says, “But they were all very humble and gorgeous.”

“It was so amazing to have two Fernie bands – we felt like were on tour,” says Pollock, “It was really fun.”

While all three members are talented and trained musicians, the instrument is just the frame – the vocal harmonyis the art. Formed in the winter of 2013, Hark Raving Sirens creation story is one of serendipity and boldness. Butterworth and Pollock had a gig booked at Infinitea with another musician. That other musician couldn’t do the gig. Butterworth and Pollock tried to cancel said gig, but Stephanie Fleming, co-owner of Infinitea, refused to let them cancel. Butterworth remembered meeting Murray the previous spring on a float trip, where they sang all the way down the river.

“She called me up and said, ‘hey, do you want to learn 20 songs for Friday?’ And it was, like, Monday, or something. Maybe I’m exaggerating, but I think that was the timeline,” Murray says. “It was just a one-time thing: ‘do you wanna play music this Friday?’ And I was, like, ‘okay.‘ And then we fell madly in love.”

And the honeymoon is far from over. During our whole conversation on the dock of Maiden Lake, an interesting and friendly dynamic emerges. Each of them had ideas of things they’d like to work on: more material, showmanship, original songs, record!There is no end to the possibility or the dream. Inspired by the Andrews Sisters, a close harmony group who had more top 10 Billboard hits than Elvis or the Beatles, it’s easy to see that the members of Hark Raving Sirens love what they are doing and they love doing it with each other. Which certainly helps when they’re agonizing over phrasing or arrangements. Their sets are both vocally intricate and fun – everything from the Andrews Sisters to 80s pop.

“With a group like this, you can get away with having something more comedic,” Pollock says. “Whereas when you’re writing solo stuff, it’s all broken hearted.”