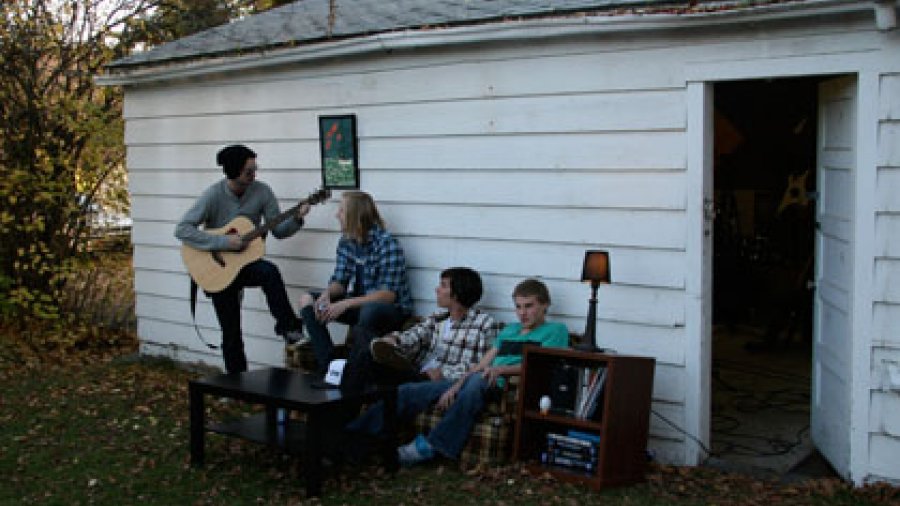 If the hills were alive with the sound of music, what kind would tickle the Griz’s pelt? It’s hard to imagine him being classy enough for jazz, and Latin rhythms would be too steamy for Fernie’s snow deity. He’d look too cute with a ukulele and too silly with a kazoo. No, I picture the Griz at home making fuzzy notes on an electric guitar or bashing away on some drums—a real rock ‘n’ roll man. If this is true, he’ll be easy to spot when Calgary’s DangerFloyd comes to his party with its unpretentious brand of his favourite music.

The quartet began life as a two-piece acoustic, helmed by Ryan Danger and Kurtis Floyd. Talking to Danger, it isn’t difficult to understand why other musicians wanted to join the fold. His way is easy going and humble, and he doesn’t seem to shy away from new experiences. It shows in his attitude to playing his first gig outdoors in winter. (“We’re used to playing in small clubs where it’s way too hot to function, so this might be a nice change of pace, in fact,” he says.) And it shows in the band’s approach to writing music.

“We’ve always kind of gone into writing and songs with the idea not to write for one specific genre or one specific frame of mind for every song,” he explains, “but to let things develop naturally.”

Although Danger and Floyd still perform together acoustically, adding bassist Graham Coskey and drummer Jeff Dunn not only electrified things, it made for another dimension to the band’s sound. It opened the doors to experiment with other instruments and musicians.

“It’s interesting having that dynamic from being solely acoustic—you have the opportunity to really build and control the momentum of the song having just two people involved. Getting everyone else into the band, it was definitely a learning curve,” he says. “Adding things in like horns has, I think, made the songs a little more dynamic. Not necessarily in a soft-to-loud mentality, but just in the musicality that it brings to the song.

“But we’ve always been big on vocal harmonies,” Danger adds. “Me and Floyd both enjoy singing at the same time and really adding as many musical layers as we can to a song, to try to bring out the emotions in other people and ourselves.”

DangerFloyd’s self-titled debut is due out just before the band comes to town. Albums are often seen as a snapshot of a band at a certain time, and by that definition, Danger sees this album as a culmination of the band’s first two years.

“It took us a little longer than expected, but we had the opportunity to really take our time with our first big full-length production, so we wanted to make sure that everything went exactly according to plan,” he says. “We really wanted to try to express where we’re coming from as a band—which is basically the idea that we’re here to do this for … not necessarily for ourselves, but for fun, for the sake of playing music in front of people and hoping that someone at least a bit of a beneficial experience from that.”

It’s hard to imagine an outdoor concert being a bad time, but if there’s anybody to hope DangerFloyd pleases, it’s the Griz.