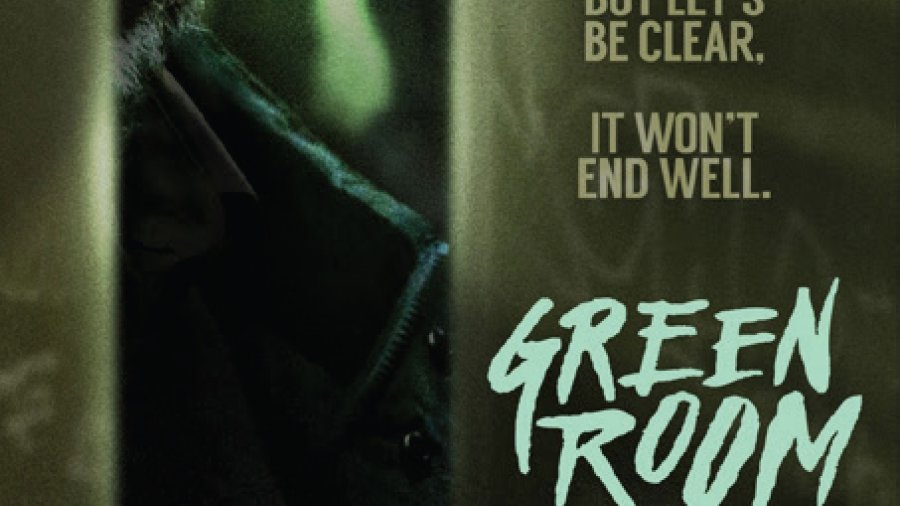 Punk Rock is a rock genre that developed in the U.S., United Kingdom and Australia in the 1970s. The bands rebelled against the perceived excesses of mainstream rock, stripping down instrumentation, writing anti-establishment lyrics, and creating hard-edged melodies and singing styles. One of the major splits in the punk movement was between punk musicians on the far right, such as Sire, and those who were left leaning, with a more social conscience such as Bikini Kill.

Green Room is about the misadventures of a struggling punk band called The Ain’t Rights in the 21st Century who are persuaded to play in a venue run by an organization of far right skinheads in the backwoods of Oregon. The expectation of the skinheads is that the band will be of the far right variety, but they soon make the uncomfortable discovery that the band is, instead, part of the left leaning faction.

At the end of the concert, which on the whole doesn’t go too badly, the band prepares to leave, but at the last minute makes a detour to the green room to retrieve a cell phone. Where upon they discover the remains of a murdered concert-goer. It then becomes clear that the supremicists plan to murder the band because of their discovery, and our heroes must fight their way out of the club.

The interaction between band members is detailed and nuanced. The audience gets a sense of who these people are, which enhances the tension when the group is placed in extreme danger.

However, we don’t get much of an insight into the relationships between members of the skinhead gang. Their conversations are short, to the point, and there is a lot of mumbling; but it soon becomes obvious that there is some dissension amongst them, and two members turn sympathetic to the band's situation.

The three best known actors in the film are Anton Yelchin, Alia Shawkat and Patrick Stewart. They all give excellent performances.

Anton Yelchin plays the main character, Pat. Yelchin is best known for his role as Chekov in the new Star Trek trilogy. Green Room is one of the last projects finished by Yelchin before he died in a car accident on June 19, 2016 at the age of 27.

Alia Shawkat stars as Sam, bandmate to Pat. Her previous work includes numerous independent films including Whip It and The Final Girls. She also appeared in the TV series Arrested Development and has had guest spots in Portlandia and Broad City.

The most surprising performance comes from Sir Patrick Stewart, also of Star Trek fame, who plays Darcy Banker, the venerable leader of the neo-Nazi organization. Banker is all at once menacing and banal. Stewart gives a terrific performance, although, as always, his American accent needs some work.

Green Room is directed by Jeremy Saulnier. It is a departure from his earlier and best known film, Blue Ruin, a small independent film about a man seeking revenge on the family that killed his father. The films are similar in that they feature a lot of violence and bloodshed.

I give this film two thumbs up.