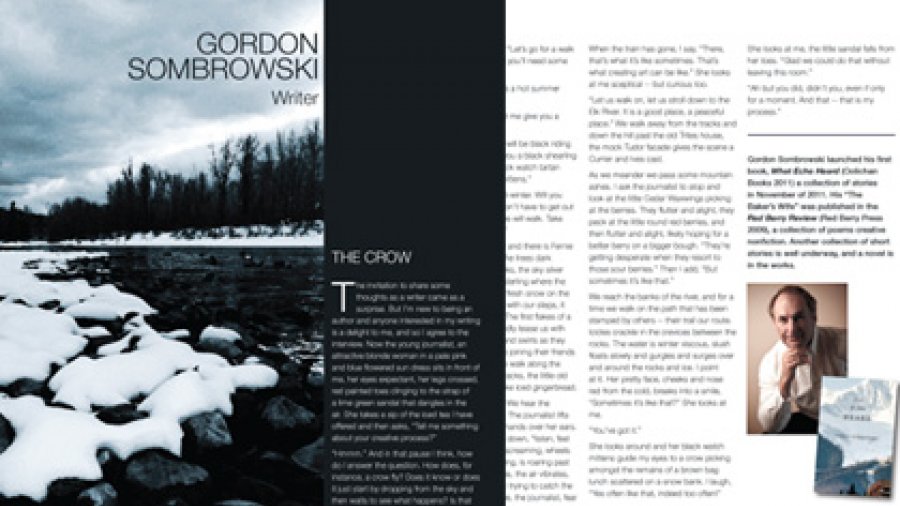 The Crow
The invitation to share some thoughts as a writer came as a surprise. But I’m new to being an author and anyone interested in my writing is a delight to me, and so I agree to the interview. Now the young journalist, an attractive blonde woman in a pale pink and blue flowered sun dress sits in front of me, her eyes expectant, her legs crossed, red painted toes clinging to the strap of a lime green sandal that dangles in the air. She takes a sip of the iced tea I have offered and then asks, “Tell me something about your creative process?”

“Hmmm.” And in that pause I think, how do I answer the question. How does, for instance, a crow fly? Does it know or does it just start by dropping from the sky and then waits to see what happens? Is that the creative process?

I say to the journalist, “Let’s go for a walk and I’ll show you, but you’ll need some winter boots.”

“Let’s say your boots will be black riding boots and we’ll give you a black shearling winter coat with a black watch tartan scarf and matching mittens.”

“And let’s say it is mid-winter. Will you walk with me? You won’t have to get out of the chair and yet we will walk. Take those steps with me.”

We walk out the door and there is Fernie in all its winter glory, the trees dark against the snow banks, the sky silver fox grey, translucent sterling where the sun tries to hide. The fresh snow on the sidewalk sidles along with our steps, it is light and powdery. The first flakes of a storm that is coming idly tease us with their playful swoops and swirls as they ride the breeze before joining their friends on the landscape. We walk along the avenue near the rail tracks, the little old miner’s houses look like iced gingerbread.

A train whistle blows. We hear the approach of the train. The journalist lifts her arms, places her hands over her ears. “No,” I pull her hands down, “listen, feel it.” The train, pistons screaming, wheels rumbling, whistle blaring, is roaring past us. The ground shakes, the air vibrates, the snowflakes scurry trying to catch the train. We watch in awe, the journalist, fear on her face.

When the train has gone, I say, “There, that’s what it’s like sometimes. That’s what creating art can be like.” She looks at me sceptical -- but curious too.

“Let us walk on, let us stroll down to the Elk River. It is a good place, a peaceful place.” We walk away from the tracks and down the hill past the old Trites house, the mock Tudor facade gives the scene a Currier and Ives cast.

As we meander we pass some mountain ashes. I ask the journalist to stop and look at the little Cedar Waxwings picking at the berries. They flutter and alight, they peck at the little round red berries, and then flutter and alight, likely hoping for a better berry on a bigger bough. “They’re getting desperate when they resort to those sour berries.” Then I add, “But sometimes it’s like that.”

We reach the banks of the river, and for a time we walk on the path that has been stamped by others -- their trail our route. Icicles crackle in the crevices between the rocks. The water is winter viscous, slush floats slowly and gurgles and surges over and around the rocks and ice. I point at it. Her pretty face, cheeks and nose red from the cold, breaks into a smile, “Sometimes it’s like that?” She looks at me.

She looks around and her black watch mittens guide my eyes to a crow picking amongst the remains of a brown bag lunch scattered on a snow bank. I laugh, “Yes often like that, indeed too often!”

She looks at me, the little sandal falls from her toes. “Glad we could do that without leaving this room.”

~ Gordon Sombrowski launched his first book, What Echo Heard (Oolichan Books 2011) a collection of stories in November of 2011. His “The Baker’s Wife” was published in the Red Berry Review (Red Berry Press 2009), a collection of poems creative nonfiction. Another collection of short stories is well underway, and a novel is in the works.