Get a Lift From Turboprop 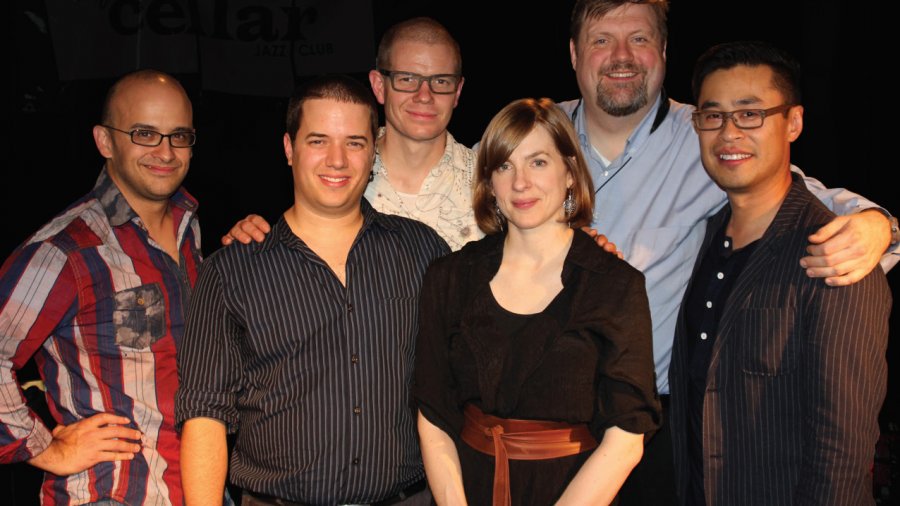 As a word person, I am fascinated by art forms that translate stories and feelings with few to no words. Dance, visual art and instrumental music boggle the rational, word-based mind, but through them, we realize that we know so much on a primal level, a level without labels. We know when a dancer is portraying joy or a violinist is playing sorrow. They connect with us whether or not we know the story behind the art.

With that in mind, I was curious about Toronto-based jazz six-piece Turboprop’s song titles. As an instrumental band, their pieces are named with specificity. “Fear of Flying” or “TGV,” (about the bullet train between London and France) give very concrete labels to the music behind them. But what comes first? The music or the name?

“I feel like for most of them, it’s the composition, but there’s definitely where it was the same time,” bandleader and drummer Ernesto Cervini says. “The first three notes of ‘TGV’ were based on the sound that was played at the train station in Paris. I had taken the TGV, the bullet train from London to Paris and there are these three pitches that they play before they make an announcement, and so I wrote them down, and I wrote the song based on those three pitches. So the name and the song were one the song from the beginning.

“But then I have other stuff, where I’ll write something and I’ll say, okay, what does this sound like, what’s going on in this? And then it will be about someone or something. Like ‘Fear of Flying,’ I think, it was just my wife doesn’t like flying and it felt like this really angsty song and it made sense to me. And ‘Three Angels’ I wrote for my sister, who was pregnant with triplets and she lost them, so I wrote that song for her. But I think I wrote the song right before it happened, and then the name … it was like, okay, now I know what this is for.”

Cervini has been telling stories with music for a long time, some 20-plus years and he’s only in his mid-thirties. The multi-instrumentalist was already gigging with a big band by the time he was 12 years old, studied music in university and is now the leader of or member of a handful of bands. Turboprop (which I think we can all agree is a wonderfully evocative band name) was borne out of the Ernesto Cervini Quartet. After several albums and many gigs, Cervini wanted to expand the quartet’s ability to make music by using more voices. The nucleus of the quartet was kept, but Turboprop adds two more players, which not only adds lift, but also range.

“I love to get their input whenever I can, because as the band leader, there’s so much that goes along with that, in terms of organization and music and talking on the mic and all of that stuff, so the more that I can share the responsibilities, the better,” he explains. “I didn’t used to feel that way as much, when I was younger. I was a little more … I wanted to keep everything in my control, but now, I don’t know, it’s nice to have other people’s input, because they will think of things that I won’t.

“To be honest, I invite all of the other musicians to write arrangements for the band as well,” Cervini continues, “because it just broadens the range of music we play, and that’s just going to make it a better experience for us and the listeners.”

Music is such a powerful force. It lets us share our common stories and emotions. And whether you’re the player or the listener, music lets us cry together and it lets us celebrate together.

Turboprop performs at the Arts Station December 7. The concert is free, but you must reserve tickets in advance.