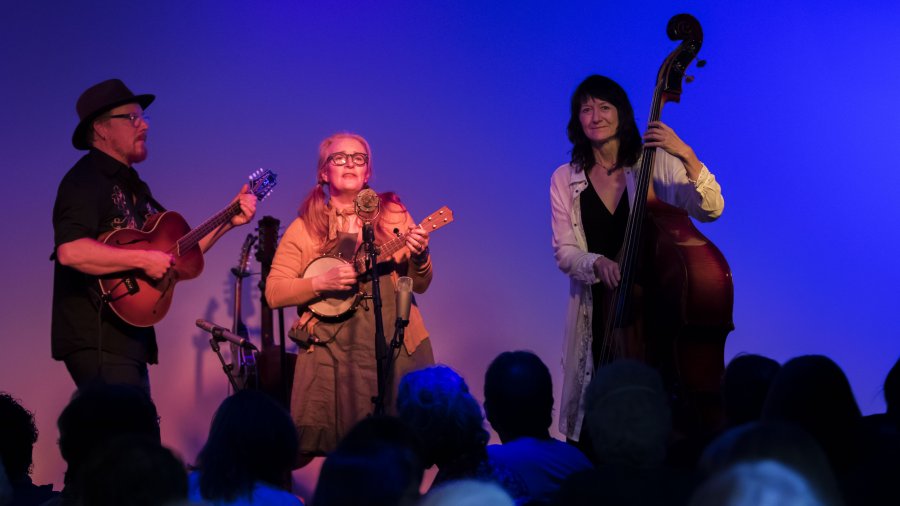 At the height of the folk music revolution that carried the likes of Bob Dylan from obscurity to legend, the Greenwich scene in New York was the place you had to go to see the rising stars—or to be one of them. The Gaslight Café on MacDougal Street was one of those iconic NYC haunts that you walked down below street level to get into. The windows of the café opened into shafts that fed fresh air from above, so audiences would snap their fingers instead of clapping at the end of a song, otherwise the tenants above would call the cops. The Gaslight gave Bob Dylan and Joni Mitchell their Big Apple debut. After that Springsteen, Clapton, Hendrix… everyone on the way up made a stop at the Gaslight. It was the golden age of the coffeehouse scene and performers poured their hearts out to audiences that sat pin-drop silent while they sang.

Over the years the cultural convention of a coffeehouse-style concert has changed: when people sit around tables, it’s now considered acceptable to talk. When people sit shoulder to shoulder facing the same direction, talking is considered rude. Think about the last time you were at the Loaf on a Friday night—they’ve had a band playing there every week for years. Did people sit quietly and listen to the songs? Probably not. So different from concerts at the Arts Station: the lights dim and the musicians march on stage and launch into a set of tasty, tender, or rollicking tunes. Between songs they offer banter and dialogue with the audience—a connection is formed between performer and crowd. If an audience member makes a noise in the middle of a song, they likely get sideways glances from others.

Neither modality is better or worse, they are just different. One has become primarily social and the other primarily entertaining, and we the audience act accordingly. I point out the difference to suggest that one type of listening does not necessarily exclude the other—concert venues often have intermissions for mingling, and coffeehouse-style venues often get some applause, some interaction, and some kind of connection with the artist.

As a fan, promoter, and a musician, I’ve been on all sides of all kinds of concerts and had great experiences at all of them. Over the years I’ve noticed a few common things that help make a live music experience successful, and the single biggest one is making sure the band feels valued and appreciated—there are so many easy ways to do that.

I’m so grateful to see we are well and truly putting the restrictive parts of the pandemic behind us, and all kinds of live music opportunities are back online. The last two years have been tough on everyone, but our touring musicians took an extra hard knock because they lost their income and lifestyle as well as their outlet and passion—and let’s not forget who got us through those first few months of lockdowns with hope-filled live streams piped right to our homes.

We might be a little out of practice at seeing live music, so now is a good time to rebuild habits and relearn how to make sure our troubadours know we appreciate them in person again. Regardless of the type of venue, here are a few simple ways we can keep them coming back:

1. If you’re sitting around tables, or chatting with friends, keep one ear tuned to the music and take a second to clap when a song is done. Have all the fun and be conscious of the performers as well.
2. If the band has a tip jar out, and you appreciated the music, drop a few
coins in there. Costs of touring have skyrocketed, and a few bucks makes a difference to the gas and food bill. If they don’t have a tip jar, ask the server if you can leave them a tip through the restaurant.
3. Request a song, but don’t be a bully about it. Some musicians are comfortable with winging it while others may not be. It can be a simple way to engage the band by asking for a tune you think might suit their style.
4. Buy a CD. That’s the best way to get the money into the band’s hands.
5. Say a quick thank you on your way out. Most humans appreciate that small gesture. If the musician is in the middle of a song you might only get a nod back in return, but I know from experience those kind gestures are huge.
6. Share: snap photos, post on social media, tag them. The algorithm will reward them, and you might just find a new favourite feed.
In:
Art and Entertainment
Tags:
RedGirl, Live Music, arts, Culture, entertainment