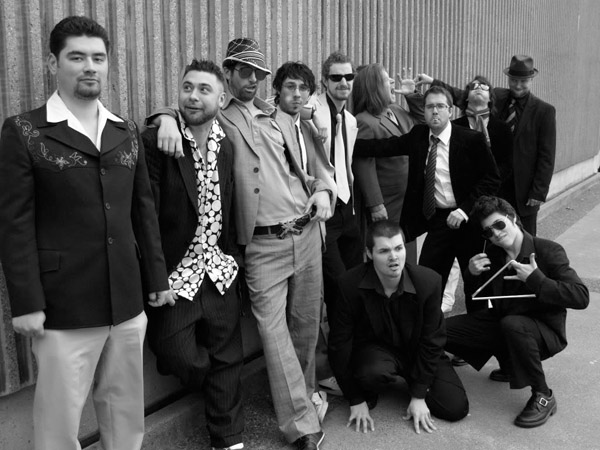 It’s safe to say that all bands want an appreciative audience. Depending on the mood that they are delivering, they are looking for anything from polite applause in between songs to hoots and hollers throughout the show.

And then there’s Five Alarm Funk. This Vancouver band is extremely demanding. The 11-piece dynamo definitely wants more than some polite clapping. Even hoots and hollers aren’t near enough. You’ve got to dance! These guys want to see you sweat like you’re pumping up Slunt, and freaking out like you’re taking on Big Money. After all, if these funksters are willing to pile the whole band into one van, it’s the least you can do.

Although truth be told, the way conga player Thomas Towers tells it, the band prefers to travel this way.

There’s no doubt about it, the travelling arrangements make for a tight outfit—both personally and professionally—and that ultimately helps in the recording process. The band’s latest and third album, Anything Possible, was recorded live off the floor, with all 22 hands (and feet) on deck. There were minimal takes and overdubs.

Five Alarm Funk already has a couple of albums it has unleashed on the public—a self-titled debut and 2008’s Voodoo Hairdo—but with the amount of sound that four horn blowers, four percussionists, a couple guitar players and a bassist can muster, Towers acknowledges that the band is very much a live act.

“As awesome as it is to be in the studio, we’re definitely a live band,” he says. “Our draw is our live show and the energy that we can throw out and the energy of people … people start smiling and dancing and that makes everyone on stage just want to play better, and then people want to dance harder and then all of a sudden—you just can’t control it.”

You can’t help but wonder, though, if it gets tiring. Everywhere the band goes, the audience expects an extraordinary experience, and the cost of travelling with so many bodies and instruments must be out of this world. True, because of cost and logistics, Five Alarm Funk played gigs in Ontario last summer for the first time in its seven-ish year history. This summer the band is upping the ante by bringing its big, sweaty dance party all the way out to Nova Scotia’s Evolve festival, with some Ontario and Quebec dates to get them there. But you get the sense, even with the logistical gymnastics, that the band wouldn’t have it any other way.

“It was never a question about money—never a factor of, like, well, we could make more money if we lost these people. Completely the opposite attitude,” Towers explains. “It was, like, we need more people to make the sound complete. We need to be able to fill out this horn section. We need harmonies. We need melodies. And you can’t do that with six people and even six is bigger than most contemporary bands. How the heck are you supposed to get a nice, full sound out of that? Especially if you’re pre-occupied with singing all the time.
“It’s mostly instrumental, mostly beautiful,” he adds. “A little bit savage every now and then. Just for a few parts—we don’t want to scare anyone away, but sometimes, you just got to let the beast out of the cage.”

Five Alarm Funk will be performing at the Clubhouse on Friday, August 13.