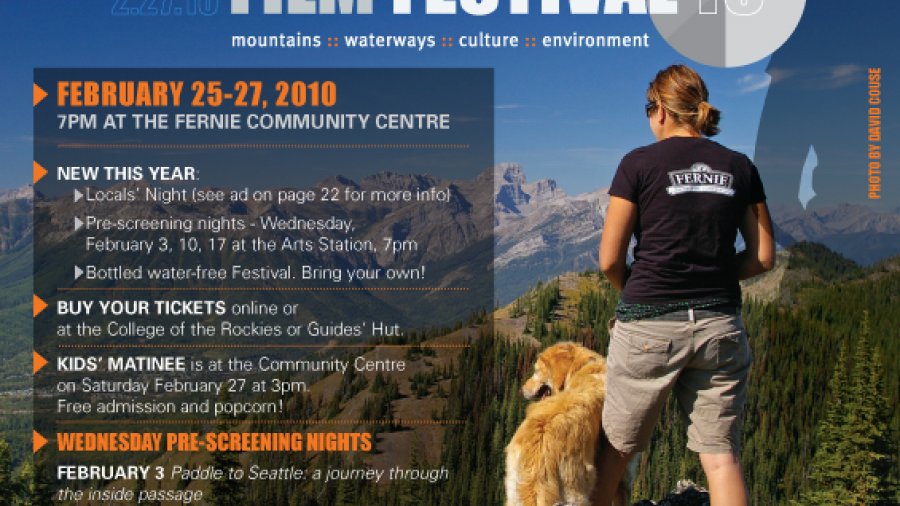 Like a lot of great ideas, the Fernie Mountain Film Festival was conceived on a skiing trip and born just four months later after an intensive planning process. Four years on, Brian Bell is blown away by the support and interest he’s seen in the festival. He says that selecting the films is still a lot of fun and the possibilities are endless.

“Every year we’ve seen a bigger attendance” Brian says, “and that has given us the confidence to keep growing the event and adding new features each year. There are still a lot of options to explore which helps keep the program fresh and the volunteers enthusiastic.”

The festival’s mission statement offers a glimpse into the program, pushing the boundaries of adventure film-making and exploring areas you might not expect. At the festival you’ll trek into new worlds and experience the diversity, beauty, strength and inspiration of our amazing planet and the people who seek to keep it that way.
When I attended last year’s festival the star attraction of the evening was The Fine Line, but the film that sticks in my mind was one of the shorts- The Crack Addict. The title and the subject didn’t really have me hanging out for start of the screening but I was quickly transfixed by the show of skill and agility that follows the opening credits. With each new grab, Jean-Pierre is more daring, more focused and more amazing to watch. Later, a seemingly innocent shot of the mini Montrealer searching for a finger hold in a fissure slowly rotates and pans out- suddenly he is no longer navigating a simple change of angles but instead hanging underneath a sheer horizontal plate by nothing more than fingertips and a stretch of rope. Like a furious spider he crawls along the single crack with fingers and toes until finally reaching around the lip of the rock-face, lodging one hand in the crack and casually swinging back to make a face at the camera. I wasn’t the only person in the room who missed a breath or two during the film’s 13 minutes.

This is just one aspect of the FMFF- you never know what you’re going to love. Because there’s just too much to pack into one weekend, the festival is supplemented by a ‘locals’ night on Thursday the 25 to showcase local film-making efforts with cash prizes for the best entries. Local films may be submitted until February 15. An exhibition of mountain art will take place at the Redtree Restaurant and this year all artistic disciplines are welcome. You are invited to attend the exhibition launch on February 20,; winners will be announced at the festival the following weekend. New to this year’s event, the FMFF will screen 3 specially selected previews at the Arts Station on Wednesdays through February. The series features Paddle to Seattle on Feb 3, followed by Freedom Riders on Feb 10 and Let it Ride- The Craig Kelly Story on Feb 17.

The Fourth Annual Fernie Mountain Film Festival is at the Fernie Community Centre, February 25-27. For schedules, tickets and more, visit www.ferniefilmfestival.com. Check it out and remember to vote for your favourites!