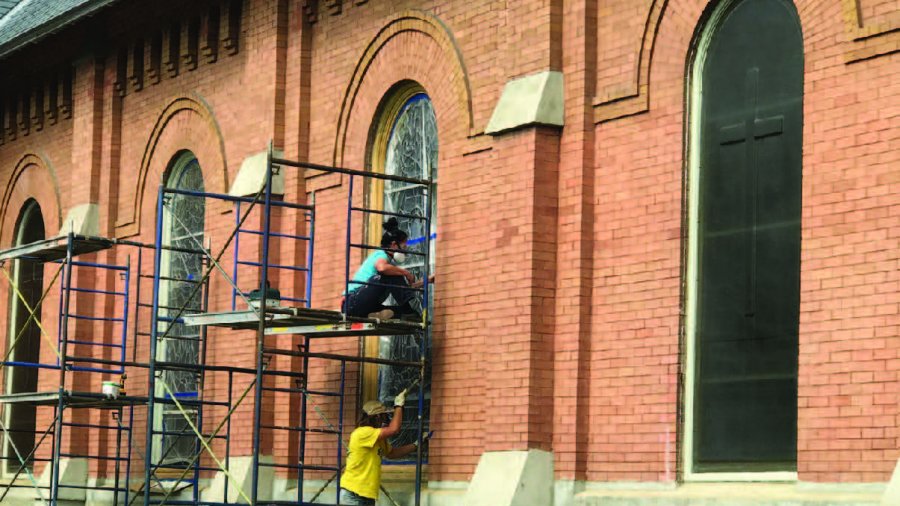 You may have noticed work being done on the stained glass windows at Holy Family Catholic Church or in the entrance to the Fernie Museum building (originally built as the Home Bank of Canada in 1910); these projects are evidence of new conservation work in progress, thanks to a funding program aimed at protecting and maintaining heritage structures. A total of six significant local heritage buildings have been successful recipients of 2017 and 2018 Built Heritage Grants, funded by the Columbia Basin Trust and managed by Heritage BC. The program is now on its third and final intake for Built Heritage, and the second for Heritage, Museum and Archives initiatives.

Jennifer Dunkerson, Heritage Planner for the Columbia Basin Region, Heritage BC, is responsible for the program on behalf of The Columbia Basin Trust. She supports local organizations in their efforts by organizing and delivering workshops and offering one-on-one support, assisting in project identification and development, and overseeing and delivering a responsive granting program to support local heritage initiatives. Dunkerson recognizes that through recent initiatives such as the Heritage Master Plan, “the community has indicated an increasing awareness of its heritage and by participating in the two grant programs, and has seen very successful outcomes for some tremendous projects.”

Last September during Chautauqua, heritage consultant Elana Zysblat took folks on a walking tour to learn about the history of these significant buildings, their evolution over time and the plans for their conservation. The walk was called “Fernie’s Greatest Hits Heritage Tour” because it took in many of the treasured and most recognized of Fernie’s buildings, the true old-timer rockstars of this town.

So what are the plans for these buildings? Let’s start with City Hall, built in 1905 as the Crow’s Nest Pass Coal Company headquarters. Probably Fernie’s most unique building, it is constructed of hollow concrete blocks custom cast on site with local river sand to give a unique local colour. It has a commanding position in the centre of its own block, enhanced by its Dutch Colonial form and ornamental elements inspired by European castles; giving it both an elegant look but also the aspect of a fortress. The City of Fernie was successful in obtaining funding to produce a Statement of Significance, a Condition Assessment, a Heritage Conservation Plan and an Accessibility Plan to ensure that as improvements and renovations are carried out, they are done in keeping with the building’s design and character.

The City has also commissioned similar assessment and conservation planning documents for the Courthouse and the Fernie Museum. The Museum building is undergoing the second phase of its conservation work this summer, after completing work on the entrance last summer. Three of Fernie’s iconic churches are also recipients of heritage planning grants – Holy Family Catholic Church, Knox United and Christ Church Anglican. Holy Family received a 2017 Built Heritage grant to repair some of its stained glass windows, originally built in Toronto in 1912 and last refurbished in 1963. With future work, it is hoped that the windows can be made visible once again from the exterior.

“It’s so great to see thought and investment in Fernie’s heritage buildings – ask any of the people who take care of them, they require maintenance, understanding and a community of people. These recently available funds have brought new energy and life into century-old buildings, and a renewed interest in the community,” says Zysblat.

Join us in these pages over the next four months as we look more closely at some of the ongoing projects.

In:
Art and Entertainment
Tags:
community, Heritage, history, Fernie BC