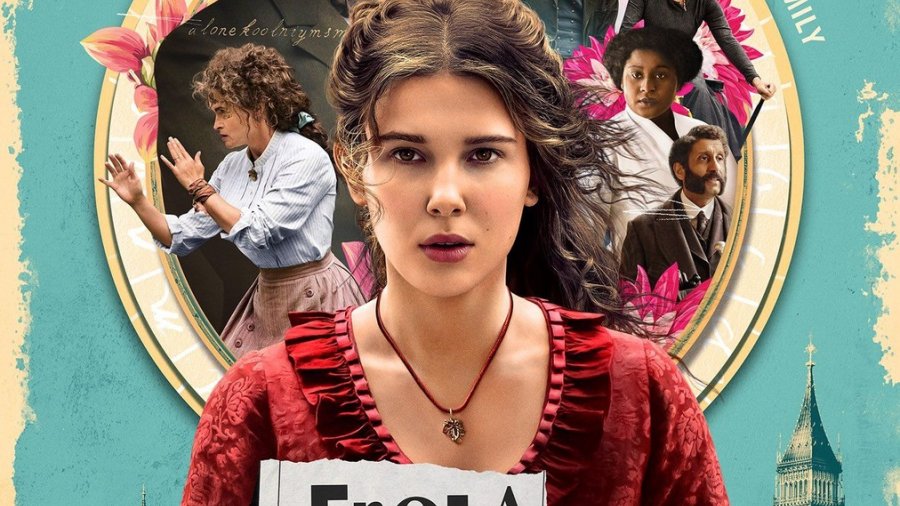 Sherlock Holmes is one of England’s most famous cultural exports. This genius detective was created by Sir Arthur Conan Doyle, British medical doctor and writer. Doyle was a prolific writer whose works included fantasy and science fiction stories, plays and historic novels. He created the character of Sherlock Holmes in 1887 for A Study in Scarlet, the first of four novels and fifty-six short stories about Holmes and Dr. Watson.

Sherlock Holmes is a perfect representation of the way in which upper middle-class Victorian men wished to be seen by society. He is calm, rational, scientifically minded and, most important, a gentleman. But in his stories Doyle never gave many details about Holmes’ family. He mentioned Mycroft, Holmes’ older brother, but said nothing about his mother, father or other siblings.

Enola Holmes is a film that remedies the situation by dealing with the adventures of Sherlock’s younger sister. The story deals with Enola’s attempt to find her missing suffragette mother, save a young nobleman from being killed by a mysterious hitman, and challenge the deeply entrenched British class system. The film is an adaptation of a young adult series of detective novels written by American author Nancy Springer, two books of which were nominated for the Edgar Awards for Best Juvenile Mystery.

Enola is portrayed by Millie Bobby Brown, who at the age of twelve gained recognition for playing Eleven in the Netflix science fiction horror series Stranger Things (2016). She made her feature film debut in 2019, in Godzilla: King of the Monsters.

In this film, Enola is the 14-year-old sister of an already famous Sherlock Holmes who is twenty years her senior. When their mother disappears, the brothers attempt to send Enola to a finishing school, but she runs away to London where she establishes a clandestine detective agency specializing in missing persons investigations.

The mother is portrayed expertly by Helena Bonham Carter, an actress known for her roles in both small independent films and large-scale blockbusters, which earned her a string of acting accolades including Academy, Emmy and Golden Globe awards. She has not shied away from playing quirky women including roles in films directed by Tim Burton such as Corpse Bride (2005), Sweeney Todd: The Demon Barber of Fleet Street (2007), and Dark Shadows (2012). The role of the suffragette mother in this film suites Bonham Carter to a “t.”

The movie also features Henry Cavill (Man of Steel) as a decidedly feminist Sherlock Holmes and Sam Clafflin (Snow White and the Huntsmen) who plays a decidedly traditionalist and stuffy Mycroft .

Fiona Shaw (Harry Potter and the Deathly Hallows) makes an appearance as the matriarch of a well-respected aristocratic family, and Adeel Akhtar (The Big Sick, Four Lions) plays the bumbling Inspector Lestrade.

This is a good movie, and an effective introduction to the concepts behind feminism. Enola is self-possessed, forthright and resourceful, a feminist hero indeed. It is action-packed, funny and heartwarming. It is currently available on Netflix.

I liked this one quite a lot. Two thumbs way, way up. I hope you will enjoy it as much as I did.