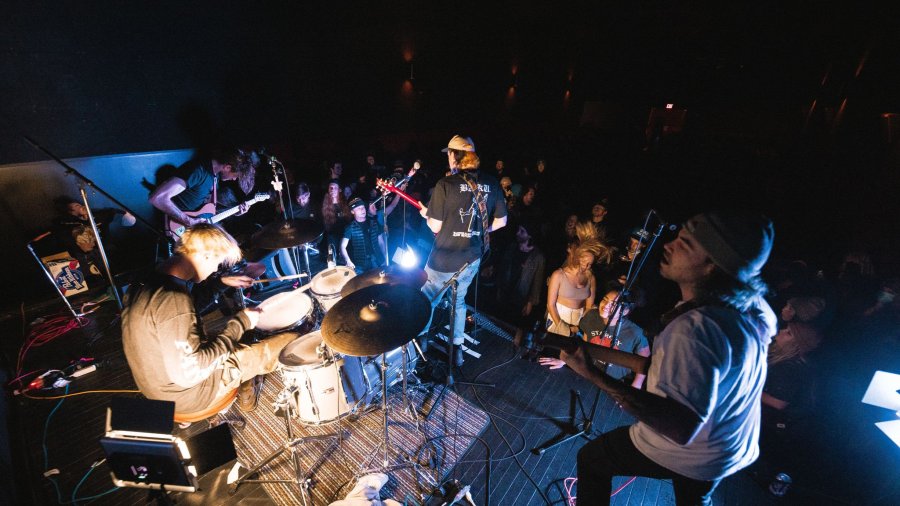 Pop Punk Sad Band. A genre not familiar to our little valley that spends the majority of its time projecting how awesome everything is, all the time. Enter Electric Blanket Band Club (EB), a four-piece supercharged group of action sport enthusiastic sad boiz from Fernie, BC.

After starting out as a bedroom art project for frontman Kevin Frank half a decade ago, the band has finally unfolded into a full-sized DIY expression vessel for not only the band but its growing fan base. After two years spent officially on the scene, the band has established itself as a local punk powerhouse. Hosting sold-out DIY punk shows, opening for major bands as they pass through town, and putting on a now annual skate park bowl show, you can catch them anywhere except where you’d expect.

Comprised of local faces Kevin Frank, Drew Hampson, Dylan Siggers, and Nick Hill the band is far from “out of town.” However, you may find yourself attending one of their shows without even realizing you know everyone in the band. (True story.)

Electric Blanket’s sound derives from the golden era of emo punk warp tour classics like MCR, Rise Against, and The Used. As the modern-day emo punk train starts back up again, bands like PUP, Mom Jeans, and The Front Bottoms have reinvigorated a genre that had previously felt lost to the ages. The group proudly presents itself as Fernie’s most active (and only) emo band.

EB prides themselves on a strict no-cover rule, exclusively showcasing original music at their shows. In their songwriting, the band dares to divert from the easy way out of soft subject matter and starlit guitar solos. Their songwriting is terribly honest and reflective, lending insight into the concept that everything can be just not quite alright every once in a while. And that’s okay.

Externally, the quartet has been inspired by local acts like The Runs and Shred Kelly. Being included and surrounded by such successful live acts was a huge driving force in the band’s motivation to get on stage and in front of a crowd. Electric Blanket feels very lucky to have such a supportive music community like Fernie’s. After hitting the gas immediately as COVID restrictions lifted, the band has gained support and fandom from friends, family, and miraculously, mere strangers!

Currently, the band is in the process of recording its first album as a full band and can be found practicing in Dylan’s parents’ basement on Tuesdays at 6:30.