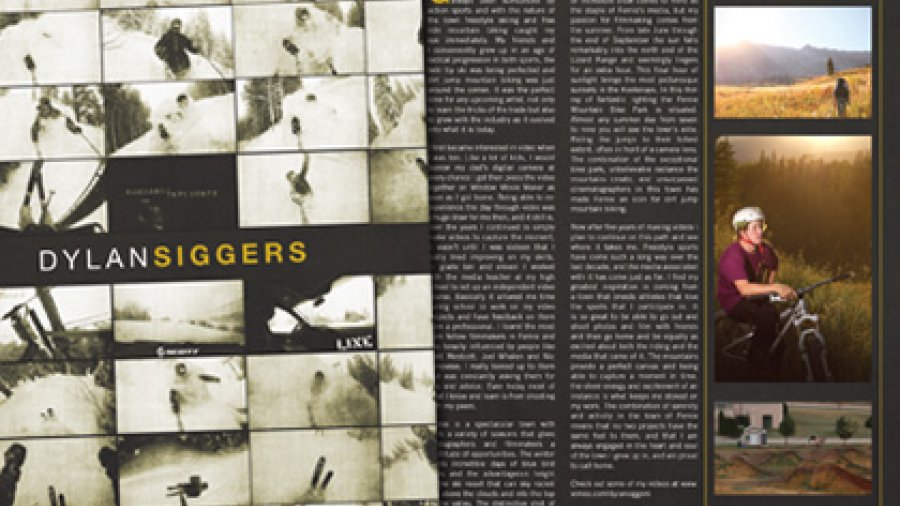 Growing up in Fernie I have always been surrounded by action sports and with the nature of the town freestyle skiing and free ride mountain biking caught my eye immediately. My friends and I conveniently grew up in an age of radical progression in both sports, the twin tip ski was being perfected and dirt jump mountain biking was just around the corner. It was the perfect time for any upcoming artist, not only to learn the tricks of the trade but also to grow with the industry as it evolved into what it is today.

I first became interested in video when I was ten. Like a lot of kids, I would borrow my dad’s digital camera at every chance I got then piece the video together on Window Movie Maker as soon as I got home. Being able to re-experience the day through video was a huge draw for me then, and it still is. Over the years I continued to simply make videos to capture the moment, it wasn’t until I was sixteen that I really tried improving on my skills. In grade ten and eleven I worked with the media teacher at my high school to set up an independent video course. Basically it allowed me time during school to work on my video projects and have feedback on them from a professional. I learnt the most from fellow filmmakers in Fernie and was heavily influenced by people like Matt Westcott, Joel Whalen and Nic Genovese. I really looked up to them and was constantly asking them for tips and advice. Even today most of what I know and learn is from shooting with my peers.

Fernie is a spectacular town with such a variety of seasons that gives photographers and filmmakers a multitude of opportunities. The winter yields incredible days of blue bird skies and the advantageous height of the ski resort that can sky rocket you above the clouds and into the top of the valley. The distinctive shot of a skier blasting through multiple feet of incredible snow comes to mind as the staple of Fernie’s media, but my passion for filmmaking comes from the summer. From late June through the end of September the sun falls remarkably into the north end of the Lizard Range and seemingly lingers for an extra hour. This final hour of sunlight brings the most picturesque sunsets in the Kootenays. In this thin ray of fantastic lighting the Fernie Mountain Bike Park is situated. Almost any summer day from seven to nine you will see the town’s elite. Riding the jumps to their fullest extent, often in front of a camera lens. The combination of the exceptional bike park, unbelievable radiance the mountains create, and unsurpassed cinematographers in this town has made Fernie an icon for dirt jump mountain biking.

Now after five years of making videos I plan to continue on this path and see where it takes me. Freestyle sports have come such a long way over the last decade, and the media associated with it has come just as far. I find my greatest inspiration in coming from a town that breeds athletes that love the sports that I participate in. It is so great to be able to go out and shoot photos and film with friends and then go home and be equally as excited about both the riding and the media that came of it. The mountains provide a perfect canvas and being able to capture a moment in time, the sheer energy and excitement of an instance is what keeps me stoked on my work. The combination of serenity and activity in the town of Fernie means that no two projects have the same feel to them, and that I am always engaged in the heart and soul of the town I grew up in, and am proud to call home.

Check out some of my videos at www.vimeo.com/dylansiggers