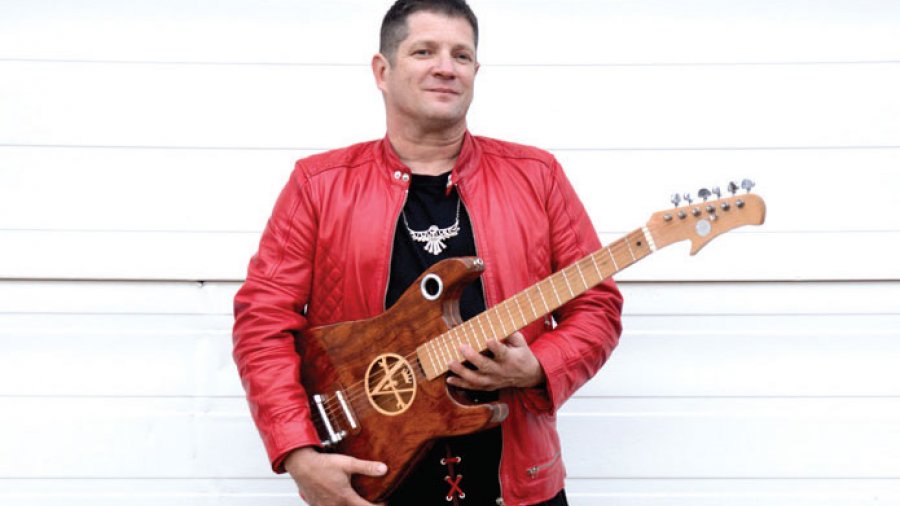 The most interesting discoveries often happen because the person at the helm is dogged enough to chase their dream regardless of the obstacles. Drew Swan of King Vulture Guitars has organized his life around this journey to build his unique diametric instruments, and to do that he has created a woodworking shop in a 26’ trailer. Utilities worker by day, Drew parks his mobile guitar studio wherever he can find a place. When I came upon his setup, I found the side door open, a quaint cafe table and chair outside, and a small generator purring quietly. When he met me at the door dressed in a bright red leather jacket and a utili-kilt I knew the next hour of my life was going to be fascinating. I wasn’t wrong.

MH: So, first things—what is a Diametric Guitar?
DS: I had to come up with a name because it’s new. It took me a couple years to figure out what I was going to call it. There is a soundboard bifurcating the whole instrument so there are essentially two guitars there—each with its own soundhole so the two halves are alternating airflow between the two soundholes. The biggest difference being that I can control the speed that the soundboard vibrates
at by altering the ratio between the soundholes.

MH: So, the bridge passes through the top of the guitar to the inner soundboard which vibrates in the middle of the guitar body?
DS: That’s correct. This model is the first one I’ve built in this size and shape. It’s about 2” thick and looks more like an electric guitar than an acoustic guitar, but even though it’s thin it projects so well that people always ask where I put the batteries. The next model that’s coming is going to be cast aluminium and bolt together. The sound board will bolt between the two halves.

MH: How did you get into building guitars?
DS: I was learning to make Violins, but I had a woodworking accident and lost the use of most of my left hand. After that I threw all my tools away—I couldn’t stand to see the chisels because I almost died from blood-loss. Roughly 10 years ago I started dabbling again, but because I was travelling a lot, I wanted something that didn’t need a case. I came up with the idea of using an aluminum frying pan and building a dog-bowl resonator with a wood soundboard. Then I had the idea of using a pressure cooker, so I spun off the lips of the pot on the lathe and mated the two together again. That was the first time I put the sound board inside the tone box and surprisingly it worked! I decided to take things more seriously and make something that was more of a finished product, so I started making wooden ones. My prototypes went through many changes, and I was experimenting with the resonance of different materials. One day I drilled that extra hole and I thought, holy crap, what a difference. That’s when the bass really started to come out.

I was lucky enough to live through my accident, so I wanted to come up with something of my own—that will leave a legacy.

MH: How long have you been working on your legacy project?
DS: About four years now. I’m stepping it up now with those cast aluminum models I’m talking about. I’ve got a foundry that’s going to
cast the bodies and I’ve got enough soundboard material for about 700 instruments. I have to grow, and to do that I have to scale up a notch. I don’t want to be building guitars in this trailer forever. My vision was always to get to the cast metal guitar.

MH: Do you finish them by hand?
DS: Yes, all the parts will be assembled by hand, but I’m pursuing tone, not finish. Many other guitar builders pursue finish, but it’s the tone I’m after. I think if I make it too perfect, people won’t play it—or they won’t play it often. They certainly won’t take it down to the beach. My guitar goes everywhere, but also has the sound of a great instrument. Tom Proctor, one of my sponsored players, describes it as the love child of a Baby Taylor and a banjo. I’ll always have a custom shop, but my dream is to have one of these in the hands of everyone who plays guitar.
To find out more about Drew and his guitars you can see more of his work at: