Choir Decks the Halls with Fa-la-la-la 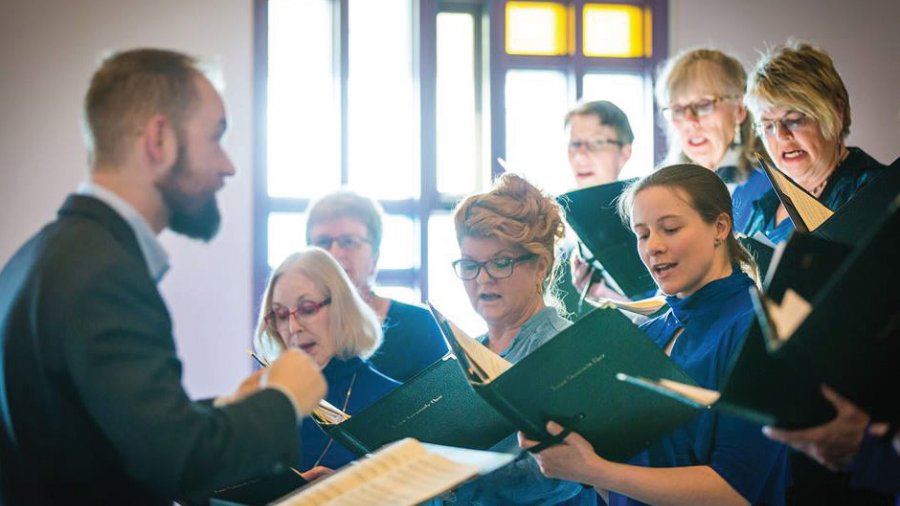 Music is the most unique of creative forms because of the physical changes it causes in the body – for both the musician and the audience. Simply, sound waves cause the eardrum and other inner ear parts to vibrate at the same frequency of the music being heard. Singers double down on this magic by also forcing their vocal cords to vibrate. Basically, when there is a room with musicians, singers and an audience, all are vibrating at the same frequency.

Back in 2013, a Swedish study of choral singers uncovered some interesting findings in how the heart rates of the singers synced up when they were singing. When songs required more structured breathing – only at the end of phrases, for example – the more synchronicity there was in the heart rates of the singers. This is especially fascinating when you consider that a person’s heart rate changes speed depending on whether you are inhaling or exhaling.

Maybe this is all too scientific, but it makes the ineffable feeling I get listening to music make sense to me. When I recently had the opportunity to watch the Fernie Community Choir warm up for a performance, there was something cathartic about listening to the many voices create a single entity of sound. “I know that research has shown that it really helps with self-regulation for students – helping to calm yourself down – it’s kind of meditative, because you’re focusing on where you’re breathing, how you’re breathing,” explains David Pasivirta, choir director and former Fernie music teacher.

Pasivirta discovered his affinity for choral direction while still in high school, where he volunteered to run a junior choir with a fellow student. It was homage to his own choir teacher. He wanted to give others what his teacher had given him: helping people find their voices. And not just musically, but also in a holistic sense.

And since the choir started – four years ago in January – it certainly has found its voice. It has been performing twice a year since its inception, in spring and at Christmas, and this fall the Fernie Community Choir performed for Octoberfest. The fall performance was a fundraiser for the choir’s trip to Banff in April, where the choir will be travelling to the Canadian Rocky Mountain Music Festival as performers. While performers compete to get in, the festival itself is not competitive and focuses on professional development of choirs and concert bands. The choir also had renowned choral clinician Dinah Helgeson come to Fernie for an intensive workshop at the beginning of November.

“She gave us vocal technique, instruction and she helped place the voices so we had the best possible matching for tone. And it was really helpful and the members of the choir really loved it,” Pasivirta says. “And I did too – it was totally valuable. And I am really grateful to the Columbia Basin Trust for giving us a grant to bring her in. That was a big bonus for us.”

For its annual Christmas concert, the choir will be performing a selection of traditional and seasonal songs, from sacred, religious to modern-day carols. It will be a chance to gather and celebrate, a chance to unify hearts and beats.