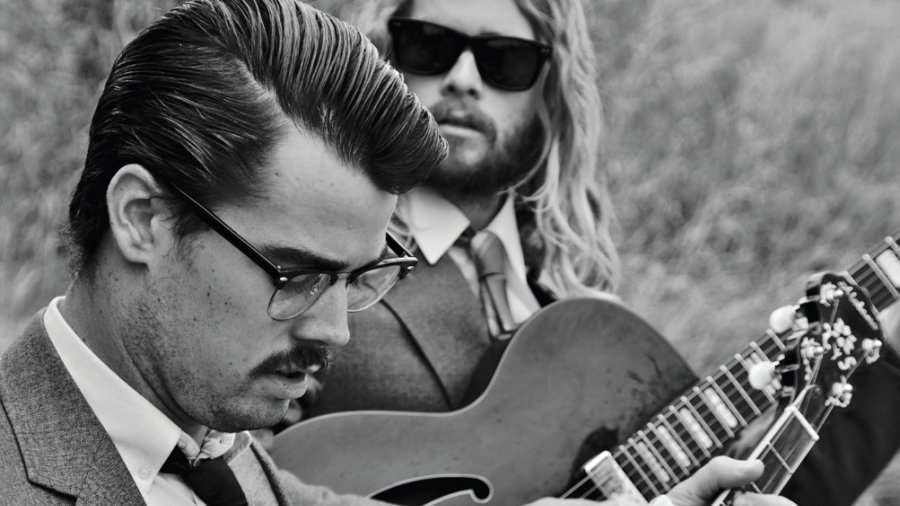 When you hear the vocal harmonies of Golden duo Broken Down Suitcase, you feel something magical – it’s not easy to accomplish this kind of unity. It’s the perfect kind of unity that comes from tons of time playing together.

So when Eric Larocque tells me that the pair isn’t officially together, I spend a portion of the interview wondering if he is putting me on. Broken Down Suitcase did, after all shoot a tour film called Breaking Up Broken Down while on a tour in Europe, a mockumentary about the breakup of the band (you can find it on Vimeo). “It’s not real, but it is real, and it’s really weird,” says Larocque. And I have been told about some bands giving in to the temptation to say ridiculous things to interviewers. But after a few more minutes on the phone, I realize that Larocque is being as earnest as the Americana duo’s music.

It’s not a bad plan. Touring can be grueling, and more than one musician has likened the band relationship to marriage. Sometimes it’s great, and sometimes it’s more of a grind. Not to mention the fact that being on tour can be a little like leaving your real life behind. Making for breathing space means that Larocque and Caldwell return to the stage with only one thing in mind: having fun.

“The reason that we’re doing this tour – we don’t have a new album or anything – but we actually like to play music and Ben and I are really excited to play music together again,” Laroque says. “We’re playing stuff we haven’t played in almost a year now. So it’s nice to get together again, and play and enjoy it. “

Caldwell and Larocque met over six years ago, both making the trek to Golden to spend some time on the slopes. Working together at an open mic in town, the pair began writing songs and working on their vocal harmonies. They soon decided to bum around Europe, busking and playing anywhere they could. They discovered a love for the roots and folk of yore.

“I’ve always been uncomfortable talking about myself … and I find it kind of boring,” he adds. “There are so many songs about pining, that you don’t care. There are no philosophers anymore.”

Broken Down Suitcase are performing at the Royal May 23.

Other acts to check out at the Royal this month are punk band Reckless Heroes (May 2), ska/pop-punk band Nevertime High (May 9), blues band Whiskey Bandits May 16 and indie rock band Deluge (May 29).