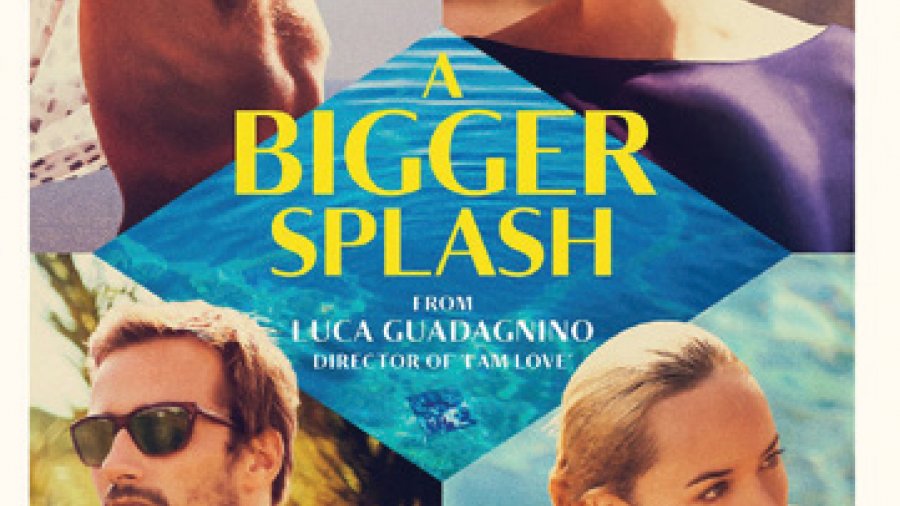 Ralph Fiennes has had a career playing characters who are grim and humourless. In The English Patient he played Count Laszlo, a Hungarian cartographer who, while mapping the deserts of Libya, ended up crippled and dying as the result of a plane crash. In Schindler's List his character was Amon Goeth, the sadistic camp commandant who thwarted the efforts of  Schindler to save the lives of Jewish prisoners. In The Constant Gardener his role was that of a grief stricken British diplomat desperately seeking answers regarding the death of his wife. Even in the dark comedy The Grand Budapest Hotel, his character was that of the hotel manager, M. Gustave, a sad and lonely man. Given that his filmography is filled with such evil, sad and/or depressing characters, it is refreshing to see him play such a vibrant, almost hyperactive, character as one of the leads in A Bigger Splash.

The film tells the story of four people, an aging pop star played by Tilda Swinton, her much younger boyfriend played by Matthias Schoenaerts, her ex-husband played by Ralph Fiennes, and his daughter played by Dakota Johnson. It deals with the angst that has built up between them over the years, with a beautiful Italian island forming the backdrop to the story.

Tilda Swinton is excellent in the role of the pop diva, which isn't surprising given that she has provided excellent performances throughout her career in such films as Hail Caesar,  We Need to Talk about Kevin, Adaptation, and Michael Clayton. What is even more impressive is that Swinton plays a character in A Bigger Splash who is essentially mute throughout the film. While the movie focuses primarly on Swinton and Fiennes, her manic former manager and producer, they are supported by good performances by Johnson and Schoenaerts.

Schoenaerts started his acting career on Belgian television. His first film role was at the age of 13 in a movie that was nominated for Best Foreign Language Film at the Academy awards in 1992. Since then he has had a busy acting career in both television and film. He appeared in Girl (2002). He starred opposite Marion Cotillard in Rust and Bone (2012) and was directed by Alan Rickman in A Little Chaos (2014). He starred with Carey Mulligan in Far from the Madding Crowd (2015), and had a supporting role in the incredible The Danish Girl (2015).

At 27, Johnson has already had an interesting film career. Her first film role was in Crazy in Alabama (1999), when she and her half-sister, Stella Banderas, played the daughters of their real life mother Melanie Griffith. She appeared in 21 Jump Street (2012) and Black Mass (2015), and starred in Fifty Shades of Grey (2015).

A Bigger Splash is directed by Sicilian-born Luca Guadagnino. He was raised in Ethiopia, but his earliest films were made in Italy. His directorial debut was The Protagonists (1999) (which also included Swinton), but his greatest recognition was for the Italian/Spanish film Melissa P. (2005).  He also directed Swinton in I Am Love (2009) in which Swinton played a Russian mailorder bride. Swinton, it seems, is fluent in Italian and is comfortable with scripts written in that language. A Bigger Splash continues the collaboration between Guadagnino and Swinton.

This is a remarkably engaging film. Two thumbs way, way up!