August - This Month in Movies 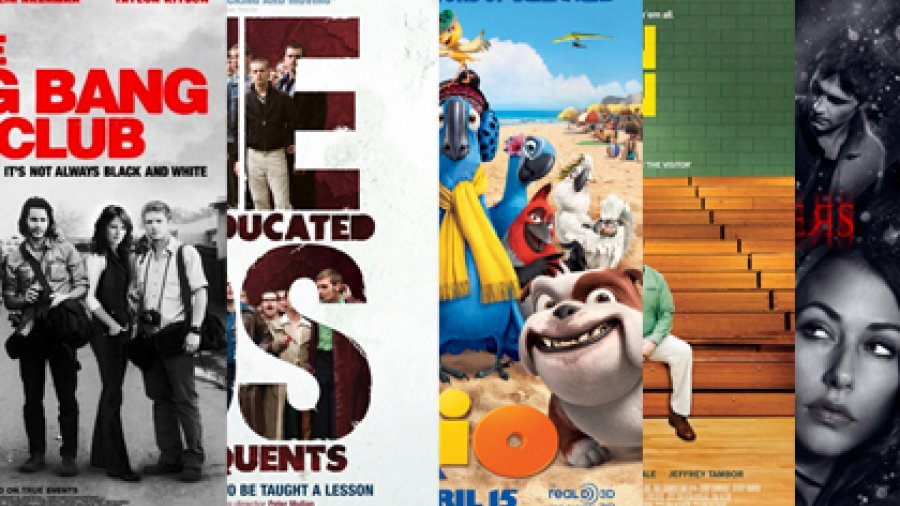 August 2: Bright, colourful and dazzling, Rio is sure to delight the young ones. Directed by Carlos Saldanha (the man behind the Ice Age series), Rio tells the story of Blu, a macaw that grows up in Minnesota. A visiting Brazilian birdman tells Blu’s owner Linda that the bird is extremely rare and convinces her to bring Blu down to Rio, in hopes he’ll breed with a wild beauty named Jewel. Once in Rio, things are not as they seem, and the birds plan an escape with the help of various animal helpers. Rio doesn’t smash out of any moulds—the be-true-to-yourself and good-versus-evil lessons are generic. That being said, the various chase scenes through Rio de Janeiro are vivid and the comic sidekicks—including Tracy Morgan as a drooling bulldog and George Lopez as a hen-pecked toucan—make the film a fun confection for both kids and adults.
Other releases: Soul Surfer, Last Night, Exporting Raymond

August 9: Carl Bessai’s films have graced the screen at all three of Fernie’s Reel Canadian Film Festivals, so it is with some pleasure that there is going to be one available for rent. Repeaters is part redemption, part thriller and part Groundhog Day. The film follows three addicts who are sent out of rehab on Step 9, the one where amends are sought from those harmed by the addict’s behaviour. When they wake up the next day to discover they need to repeat the day, things get a little squirrelly. Sonia and Kyle see this weird happenstance as a way to really turn their lives around, but Weeks is unhinged, losing himself in a dark world with no consequences. It’s easy to see the repeated day as a kind of metaphor for the addict’s life, and Bessai has a knack for drawing real characters. Repeaters, however, is a little different than some of the director’s latest films, and as such finds itself on precarious grounds at times. It could use a little more flair, but Bessai is a talented enough director to make this the kind of movie you’d be happy to stumble upon.
Other releases: Paul, Mars Needs Moms, Your Highness, Super

August 16: The Bang Bang Club is based on a true story, telling the story of four photojournalists—two of which won Pulitzers—who took some of the most captivating shots in South Africa in the early ‘90s, when Apartheid was gratefully, but violently, falling apart. It’s safe to say that war photography is a complex profession. Where does the job end and one’s moral obligation to help begin? What compels someone to take on such dangerous work? Starring Ryan Phillippe, Taylor Kitsch, Frank Rautenbach and Neels Van Jaarsveld, the film does a nice job of posing these questions without preaching the answers. It also fleshes out what happened during that time, when white leaders took advantage of conflicts between two anti-Apartheid movements. While there is plenty to take in, director Steven Silver delivers it all with an able hand, asking the big questions without muddying the waters with them.
Other releases: Jane Eyre, Meet Veronica Velour, Priest, Something Borrowed

August 23: We travel next to the brutal streets of 1970s Glasgow. John McGill is a boy with great promise. He’s a little socially inept and comes from the wrong side of the tracks, but he gets great grades. His father is a raging alcoholic and his older brother is in a gang, but he could use education as his ticket out of this dreary existence. When he calls on his brother to help with some bully problems, it isn’t long before John is sucked into violent gang life. It’s all about personal survival and self-respect, and director Peter Mullan examines the ways in which a promising life can go wrong. The film is bleak, but Conor McCarron as John is superb.
Other releases: The Beaver, Beneath Hill 60, Life’s a Beach

August 30: Win Win is a fun little film that describes the reality behind the phrase, “win-win situation.” It is often a sales pitch, with the wins happening on one side of the equation. The other side doesn’t necessary lose, but the benefits are negligible. Paul Giamatti plays Mike, a struggling, middle-aged lawyer decides to help Leo, an elderly gentlemen, by taking payment for looking after his affairs. Instead of helping Leo stay in his own home, he puts the man in a nursing home. A normally moral man, he reasons that it is safer for Leo, who is beginning to suffer from dementia. But when Leo’s grandson shows up, Mike has to take him, and it’s a win-win situation because the boy doesn’t have a home, but he is a wrestler, and Mike happens to coach a high school wrestling team. Directed by Thomas McCarthy, Win Win blends the quirky indie film with the sports movie without committing fully to either, and that makes for a movie that is like comfort food without the guilt. It’s a win-win.
Other releases: The Conspirator, Ward, In a Better World