For and Against by Sharon McCartney 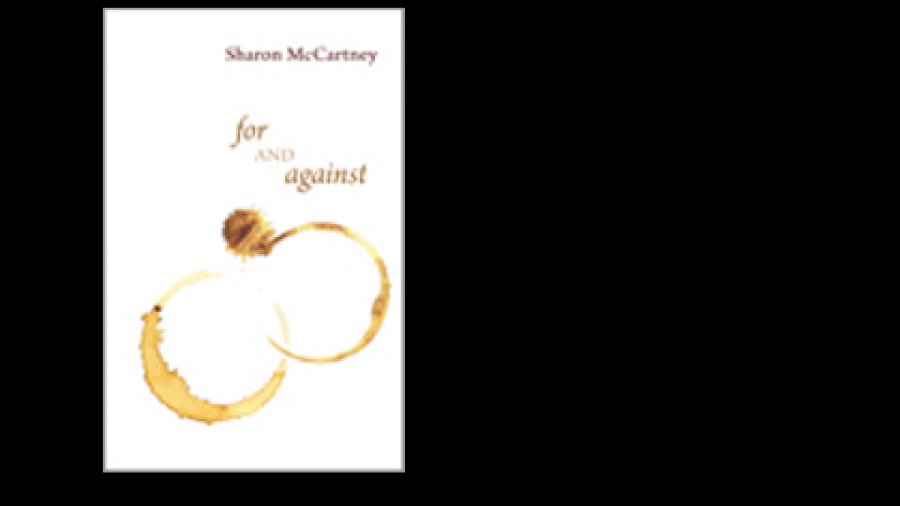 For and Against is my favourite kind of poetry collection. Rather than hiding behind clever postmodern tricks, McCartney takes personal risks and delivers meaty poems with emotional heft. She, to steal a phrase from Hemingway, writes hard and clear about what hurts.

To be specific, what hurts in For and Against is alcoholism, infidelity, divorce, betrayal, failure, cancer, and death. Mostly divorce. McCartney wrote these poems in the wake of the breakdown of her marriage with acclaimed Canadian fiction writer Mark Anthony Jarman. The collection is drenched in aching loss, and there is emotional rawness that creates an intimacy, drawing the reader into the most private kinds of turmoil.

In a poem called “Against Being Convenient,” McCartney compares an unfaithful husband to a hungry dog: “The dog might prefer to hunt, but he won’t/ walk away from the meat in his bowl.” In “Through,” she writes of alcohol excesses at the end of a marriage: “Unhappiness/ a conflagration I was attempting to douse/ with thimblefuls of alcohol.” That poem, one of my favourites, concludes: “My life like a party/ I’m dying to leave – the wrong people came.” There’s a visceral sense of loss and emptiness in these poems: an “absence/ between my ribs, a hollowed-out book stuck/ on a shelf.” But the loss is (nearly always) tempered with wit and cutting insight.

I have a memory of someone describing Alice Munro’s short fiction as “gossip transformed by genius.” If I didn’t think I was plagiarizing, I’d apply that same phrase to McCartney’s For and Against. As we make our way through these poems, we realize that McCartney is not simply swimming around in the sorrow of her own broken marriage. Rather, her poems keenly articulate the ineffable sorrow that attaches itself to all divorces (both literal and metaphorical).